The 7 Most Remarkable Renaissance Religious Paintings You Should Know About

The Renaissance period held many great artists, many of them focused on religion as their main theme, while many were commissioned by the head of the religious movements such as the Pope. Everyday people lived by the law of religion, it was something that many believed in and it was the number one way to control the masses. But with the advancement of the “humans” their opinion towards many topics changed with time. The second half of the 16th century was in many ways when people took up the challenge of understanding man’s existence in the universe. This resulted in many people to stop following the church in the way they used to. The Pope’s authority started fading away and they knew what must be done. As the way art changed so did the way to convert the people. Because many people didn’t know how to read, a method of visual influence was used. If you didn’t know word, you could still look at a painting and see what it shows. Art was a powerful tool to control the masses through visualization. So these amazing painting were born.

This masterpiece was painted from 1495 to 1498. It was on the back wall of the dining hall of the Dominican convent of Santa Maria, in Milan, Italy. da Vinci created it by using experimental pigments directly on the dry wall. Before it was finished it suffered from paint flaking off the wall. The damage was repaired but it crumbled over the years to come, it also suffered damage by the Napoleon troops and the bombing in 1943.  Not much of the original painting survived and what can be seen today are mainly repairs.

2. The Creation of Adam by Michelangelo

This is painted in the Sistine Chapel in Vatican city, it was finished in 1512. This is one of the most famous works in the high Renaissance, but it suffered from candle smoke damage by the priests, which took centuries. This fresco is dark and shadowy because of the effects the candle smoke had. There was a restoration in 1980 made, but many dislike the way it was restored, saying it is different from the original.

3. Salome with the Head of Saint John the Baptist by Bernardino Luini

This paining made by Bernardino Luini in the first half of the 16th century. The painting depicts a scene from the Gospel of Mark, when Salome demands the head of John the Baptist for having danced before King Herod and his guests. The King who promised to give her anything she wants, reluctantly agreed and had John the Baptist beheaded in the prison. It is located in the Museum of Fine Arts – Boston.

4. The Wedding at Cana by Paolo Veronese

This is a representational painting that depicts the Bible story of the Marriage at Cana, a wedding banquet at which Jesus converts water to wine. This was painted in 1563 for the Benedectine Monastery of San Giorgio Maggiore in Venice. It is said that Veronese painted himself among the 130 participants of the wedding feast, it is located in the Louvre Museum, Paris. 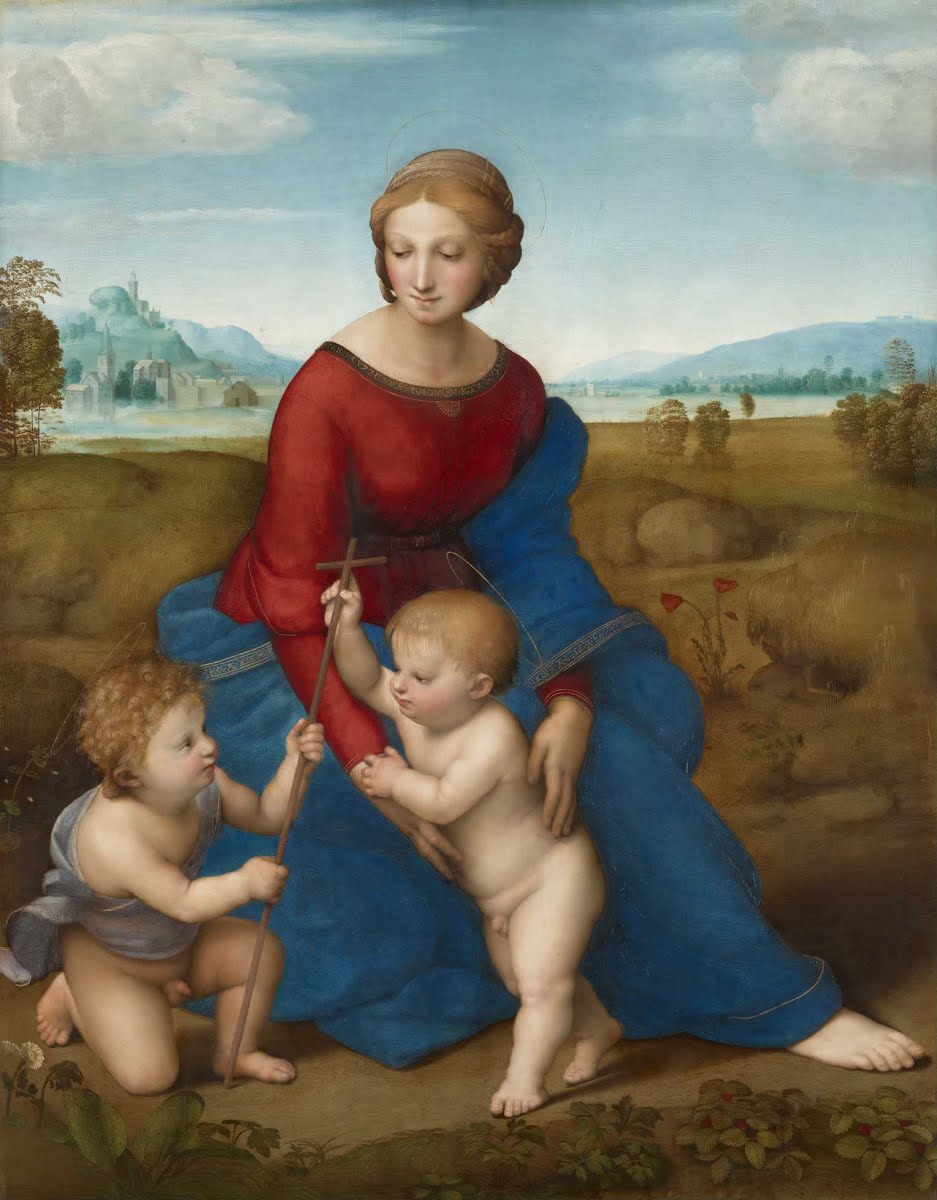 This was painted in 1505 while he was in Florence, but now held in the Kunsthistorisches Museum in Vienna. Meadow depicts Virgin Mary looking down to baby Jesus and his cousin John the Baptist who is kneeling and offering a cross to Jesus.

6. The School of Athens by Raphael

This was painted from 1509 to 1511 as a part of Raphael’s commission to decorate the rooms in the Apostolic Palace in the Vatican. This has been seen to Vatican as an attempt to reconcile Christianity and pagan philosophy. It is consisted of 21 ancient Greek philosophers.

This is an oil canvas painting that is made by Giovanni Bellini in 1505. Here the Virgin Mary could be seen with baby Jesus in the center and the four Christian saints. This painting is located in the San Zaccaria church, Venice, Italy.

This oil on canvas was painted by Giovanni Bellini in 1505. It is one of the finest examples of the so-called sacra conversazione or “sacred conversation” which was developed by Renaissance Italian artists and replaced the rigid polyptych form of the earlier periods. Virgin Mary with the baby Jesus in the center are depicted with four Christian saints – St. Peter the Apostle and St. Catherine of Alexandria at the left, and St. Gerome and St. Lucy at the right – and an angel playing a violin at the foot of the altar. The painting is housed in the San Zaccaria church in Venice, Italy.