Ivan IV, the grand duke of Muscovy, or Moscow, is usually considered the first czar of Russia, although many historians argue that the title should belong to Ivan III (the Great). Ivan IV was born in 1530, the son of Vasili III, who had ascended the throne after the death of his father, Ivan III the Great, in 1505. Vasili continued the deliberative policy of “gathering in” the Russian lands begun by his father. Vasili III also faced a threat from the Tartars, the Russian and Polish name for the Mongols. By 1519, the Golden Horde had been conquered by the Gerei dynasty of the Crimean Khanate, who would rule the Crimea until its last khan surrendered in 1783 to Catherine the Great of Russia. When Vasili died in 1533, he left a stable and expanded grand duchy to his successor, Ivan IV.

The  harsh childhood of Ivan IV

Ivan was only three years old when his father died, and his childhood was a nightmare of a sanguinary feud between the dominant families of the Kremlin and the Shuisky and Belsky families. He was purposely ignored, an object of contempt, and lived a life in fear of assassination. At the age of 13, he dramatically demonstrated his right to rule against the elite families of the boyars, or high nobility. On December 29, 1543, 13-year-old Ivan called for Prince Andrew Shuisky to be arrested and thrown to starving hunting dogs. Ivan showed clear signs of sadism through his treatment of animals and women as well, whom he and his compatriots often raped and killed. 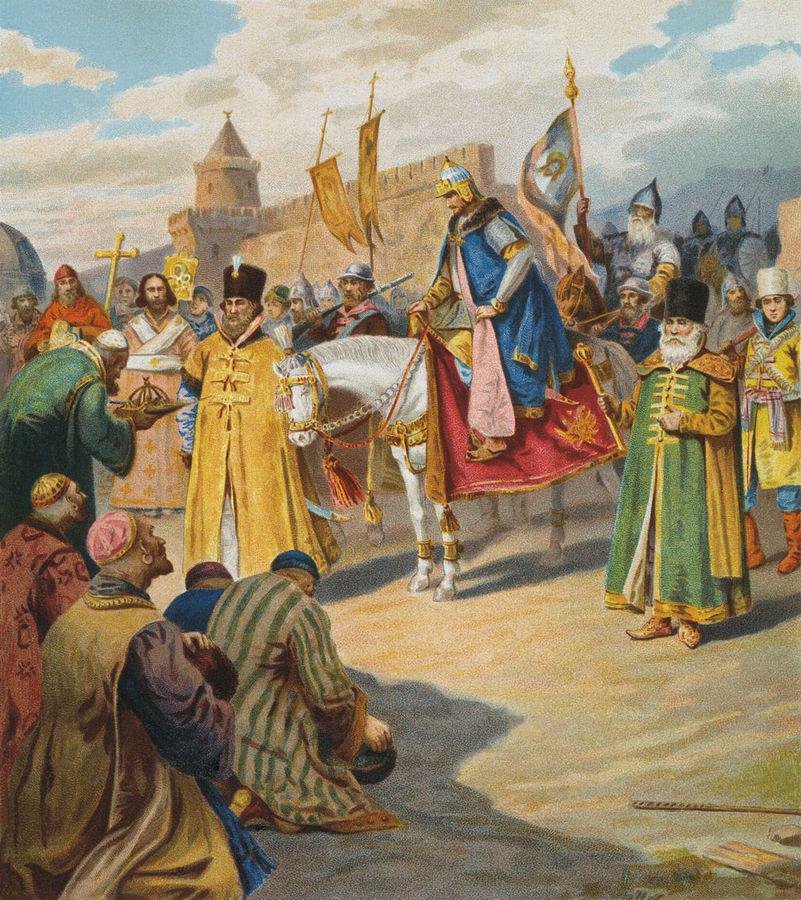 In January 1547, Ivan IV was crowned with great ceremony as the Russian czar. He underscored his “Russianness” by marrying a native-born Russian woman, Anastasia Romanova, of the wealthy Romanov dynasty. The Romanovs, while not hereditary boyars, were a wealthy trading family, whose fortune depended on royal patronage. In this, Ivan was following the model of most European monarchs, who were now favoring the ascendant middle class, who would be beholden to them directly, rather than their ancestral nobles, many of whom also had claims to the thrones of their countries. 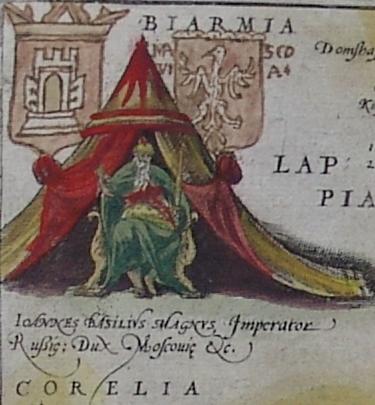 A bright future for Russia

The early years of Ivan’s reign were indeed promising for Russia, and he seemed to be following in the careful, almost analytic footsteps of Ivan III and Vasili III. It was the same cautious way that Russia would expand into Central Asia, beginning in Ivan’s own reign, by fortifying each resting place before undertaking further progress. Ivan called a Russian great council and swore that he would carry out continual reforms in the government of the state. Reforms were carried out in local government to diminish the influence of the boyar nobility and enhance the participation of all classes, in a conscious attempt to bind them to throne. A Foreign Ministry was officially established, and a Ministry of War was also put on a permanent foundation.

War and conquest of the Tartars

In 1550, Ivan embarked on a period of military reform that essentially made him the father of the Russian army. He realized the importance of muskets and artillery as a way to overcome Tartar tactics. The reliance on muskets and artillery assured Muscovite, or Russian, superiority in most battles. In 1552, Ivan felt confident enough to use his new army to attack the Khanate of Kazan, one of the successor states to the Golden Horde. Since all such kingdoms traced their origins to sons or grandsons of Genghis (or Chingiz) Khan, these are known to history as the “Chingizid” khanates. Kazan fell to Ivan, as did the Khanate of Astrakhan in 1556. The Khanate of the Crimea felt sufficiently threatened by Ivan’s sudden eastward expansion that in 1555 Dawlet Gerei Khan had raided Moscow, but the attack did not deter Ivan.

In the same year, the Crimean Tartars raided Moscow, Ivan began the Livonian War in 1555. It would end fitfully in 1583, absorbing most of Ivan’s energies, manpower, and treasure for three decades. (Some accounts give the dates of the Livonian War as 1558–82.) Taking advantage of Ivan’s preoccupation in the Livonian War, the Crimean Tartars returned in 1571 to burn Moscow. Still, the extensive negotiations Ivan carried out with Elizabeth I of England not only ensured England a welcome partner in the lucrative Baltic Sea trade, but also supplied Ivan with a reliable source of high-grade gunpowder for his army. The downside, however, was that the war produced the political union of Lithuania and Poland in 1569, although the two countries had been united by royal marriage since 1386. 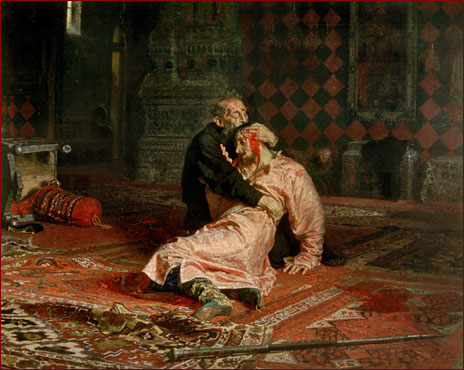 In March 1553, the second, darker, period of Ivan’s reign began, after he recovered from a high fever. When his queen, Anastasia, died in 1560, he had several of the boyars tortured and executed because he suspected them of poisoning his wife. Then in 1564, he left Moscow, vowing never to return. Ivan established the oprichniki, who may have terrorized Muscovites in earlier years. When he felt Novgorod defied him, he had the city destroyed, and Pskov almost suffered the same fate. The oprichnina, among whom were Boris Godunov and Anastasia’s brother, Nikita Romanov, rode with dogs’ heads (some say heads of wolves) dangling from their saddles and established a reign of terror. The oprichnina was an attempt by Ivan to terrorize all Russians into obeying his will without complaint. Ivan’s experiment in state-sponsored terror succeeded. 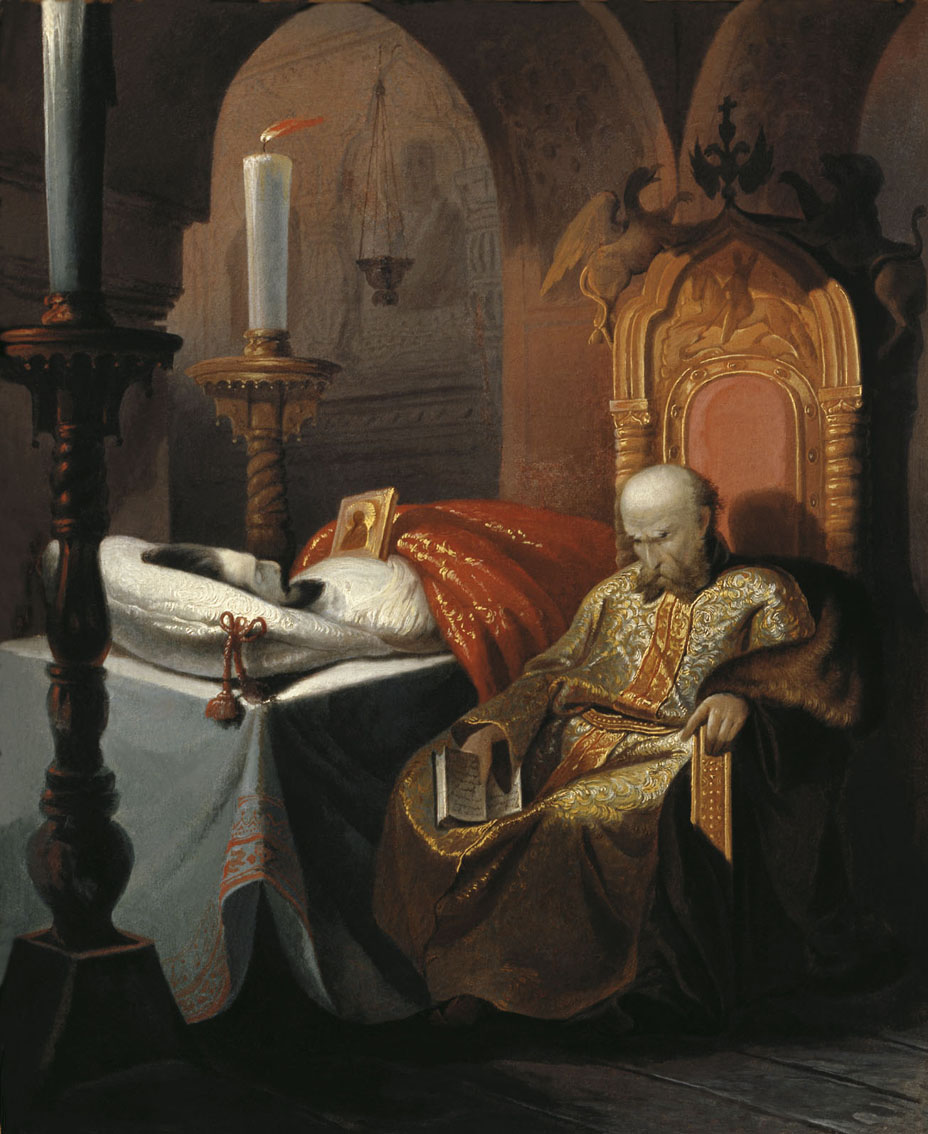 Why was Ivan so Terrible ?

Although many causes have been brought forward to explain Ivan’s apparent insanity, one seems to have received comparatively little attention—mercury poisoning. It is known that in his later life Ivan ingested large quantities of toxic mercury. Mercury was used as late as the World War I as a treatment for syphilis, a disease a later autopsy determined Ivan had. Syphilis itself in its final phase can also cause insanity. In November 1581, Ivan IV, in a rage, raised the iron-tipped staff he carried and struck dead his beloved son, Ivan. The czar never recovered from his terrible act. In March 1584, Ivan IV died while playing a game of chess.

Napoleon I Bonaparte – From Emperor to Exile

CONQUEST OF EUROPE Bonaparte returned to Italy, which had been taken back by the Austrians while he had been preoccupied in Egypt. He entered Italy...
Read more
Medieval History

Chandragupta II was the third ruler of the Gupta Empire of India. He reigned when the Gupta dynasty reached its zenith of power, and...
Read more
Load more