England’s Top 7 Castles Worth Checking Out

England’s top 7 castles are amazing structures that are worth seeing by everyone.

England offers such a vast and detailed history that it’s amazing to read and learn about it.

Visiting these old buildings will help you understand what it was like to live in the medieval period during a feudal system.

In the medieval period, the feudal system was present in England and dynastic families were the rulers.

In order to protect themselves, their loved ones or the community, these families ey built castles.

Many of the castles are still standing till this present day and could be visited.

Each has it’s own unique and beautiful way of display. Here we shall discuss the top 7 castles in England which are worth to be checked out once in your life.

This is a castle built by William the Conqueror in 1068 once he established his rule over England.

The majority of castles were built with wood and later turned into stone.

This castle was covered into stone in the 12 century.

The castle is located in Warwick town, in central England.

Even though this castle has seen some major changes over the years, it still holds a good amount of it’s original history and it’s beautifully displayed.

Here is the official website of this castle: https://www.warwick-castle.com/

The Tower of London is a historic castle located on the north bank of the River Thames in central London.

It was founded around 1066 with the Norman Invasion of England, and it shares a close founding time period with the Warwick Castle.

This castle has played such a huge and important role in English history and is one of the largest tourist attractions in England today.

It was well known for a majority of things, such as the Princes in the Tower.

This castle served as an armoury, a treasury, a menagerie and many other purposes as well. 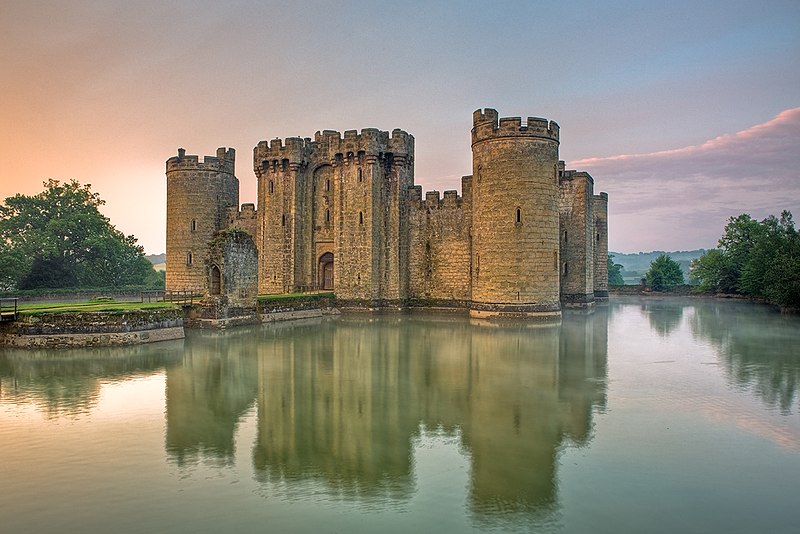 Built in the late medieval period, Bodiam Castle was erected in the year 1385.

This castle would serve largely as a defense fort because of its strategic location against the French in the 100 year war.

The castle also was used in the war of the roses.

It was a well-built castle in the right place and it was open to the public in 1925.

It can be visited today and it’s worth checking out.

Leeds Castle has had a long history and has been used for many different things throughout its time.

Here is a list of things that Leeds Castle was used for:

2. The private property of six of England’s medieval queens;

3. a palace used by Henry VIII and his first wife Catherine of Aragon;

6. An elegant early 20th-century retreat for the influential and famous;

The fortress was built about 1127 by William of Corbeil, Archbishop of Canterbury, with the encouragement of Henry I.

In 1215, garrisoned by rebel barons, the castle endured an epic siege by King John.

John used the fat of 40 pigs to create a mine under the keep, bringing down the southern corner of the fortress.

The defenders of the castle persevered but were eventually starved out after resisting for two months.

The castle was rebuilt under Henry III and Edward I.

Located in Kent, it remains one of the best-preserved castles in all of England and France.

Rochester castle was opened in 1870 to the public.

Dover castle has had a huge role in the history of England.

It has one of the best strategical placements for defense.

It is called “The Key of England” because it played such an important role in numerous encounters.

It is considered one of the largest castles in England.

There are claims that the foundations of this castle were added by the Romans in 43 A.D. as a fort because of the strategic location and placement.

There have been numerous findings confirming this claim.

It also served many English kings, such as Henry II, and it also played a huge role in the Napoleonic period.

Alnwick Castle is the home of the Duke of Northumberland.

It is located in the English county of Northumberland.

It served as a protective building for this particular dynastic family.

It’s located in the North part of England close to the territory of the Scottish Kingdom.

This castle is considered one of the most visited castle in England with over 800,000 visits per year.

We hope you manage to visit all of Englands top 7 castles and provide us with your feedback as to which you liked the most.