The History of the City with Hundred Gates – Thebes, Egypt

In the Iliad Homer famously described the city as “hundred- gated Thebes.” However, Thebes is better understood as an entire site that encompassed the east and west banks of the Nile, containing temples and palaces, the dwelling-places of the living and the everlasting homes of the dead. On the east bank were the temples of Amun at Karnak and Luxor. The ancient city lay to the east of the great temple of Karnak. As the temple expanded, the city had to move and was laid out
on a grid plan. Across the river on the west bank, bordering the strip of cultivated fields, stood the mortuary temples of pharaohs from the Middle and New Kingdoms. Behind them lay the cemeteries of the nobility, while beyond in the desert valleys, the tombs of kings and queens of Egypt. On the west bank was the village of skilled craftsmen and scribes, who worked on the royal tombs, their burial places, and those of commoners. In effect there were two Thebes, one for the living, the other for the dead. Ironically, the mud-brick city of the living has long vanished under the fields and houses of the modern city of Luxor, while Thebes of the dead on the west bank remains one of Egypt’s primary tourist locations. It is one of the largest archaeological sites in the world.

Thebes lies about 400 miles south of Cairo, just south of the Wadi Hammamat where the Nile Valley
comes closest to the Red Sea. The Egyptians called the town Waset, “dominion,” and later simply Nìwt, “the city.” Although there are some remains from the Early Dynastic and Old Kingdom periods (3100–2181 b.c.e.), it was a small town, the capital of the fourth nome (district) of Upper Egypt. The Greeks would name it Thebes after the principal city of Boeotia in Greece. A family from the Theban nome ruled Upper Egypt at the close of the First Intermediate Period (2181–2055 b.c.e.). One of these rulers, Mentuhotep II (2055–04 b.c.e.), gained control over all Egypt founding the Middle Kingdom. His mortuary temple lies beside that of the female ruler Hatshepsut, at Deir el-Bahri. Although subsequent pharaohs moved away from Thebes, the rulers of the Twelfth Dynasty (1985–1795 b.c.e.) made it the capital of Upper Egypt.

The time of Thebes’s greatest glory

At the end of the Second Intermediate Period (1650– 1550 b.c.e.), the local Theban princely family drove the Hyksos from Egypt and reunited the “Two Lands.” This inaugurated the New Kingdom, the time of Thebes’s greatest glory and that of Amun, its god. The Eighteenth Dynasty (1570–1293 b.c.e.) ruled from Thebes, with the brief exception of Akhenaten (1350–44 b.c.e.). The rulers of this dynasty built extensively at Thebes. The present temple of Amun at Karnak was begun at this time and endowed, enlarged, and embellished right down to the Greco-Roman period. The pharaohs of the
Nineteenth Dynasty (1293–1185 b.c.e.) moved their capital to the eastern Delta, but Thebes remained a prestigious religious center and burial site. Power inevitably passed into the hands of the high priests of Amun, who controlled a huge clerical corporation that owned land all over Egypt. By the end of the New Kingdom (1069 b.c.e.) the priesthood of Amun controlled two-thirds of all temple lands and 90 percent of Nile shipping. Thebes was sacked and looted by the Assyrian king Ashurbanipal in 664 b.c.e. By this time the importance of the city even as a religious site had begun to diminish as successive foreign conquests, Persian, Greek and Roman, forced Egypt to look north to the Mediterranean.

The temples of Amun at Karnak and Luxor

On the east bank of the Nile stand the temples of Amun at Karnak and Luxor. The site at Karnak includes the temple of Amun, the temple of Mut (the Mother), his wife, and the temple of their son Khonsu, a moon god. To the north of the precinct of Amun sits the temple of Montu, the old falcon war god of Thebes. At the south, at the end of an avenue of sphinxes, is the temple at Luxor. This is dedicated to Amun in his fertility aspect: It was called the “Place of Seclusion.” It was the destination of the Theban Triad at the “Beautiful Festival of Opet,” celebrated in the second month of the Inundation. Statues of Amun, Mut, and Khonsu were placed on their barques, loaded onto barges, and towed amid scenes of great jubilation from Karnak to Luxor. 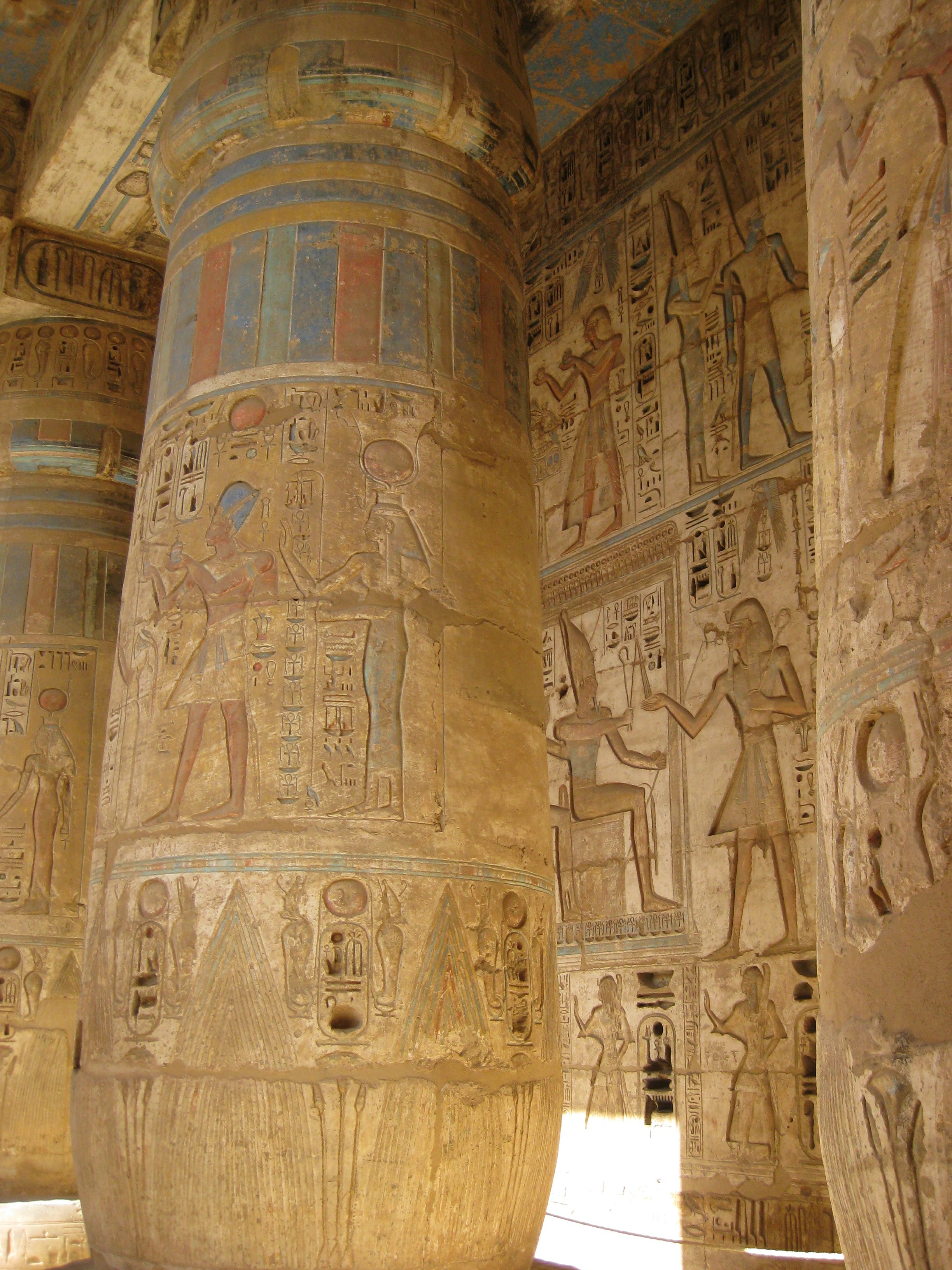 Thebes of the dead

Thebes of the dead on the west bank is a rich archaeological site. At Deir el-Bahri, the mortuary temple of Hatshepsut preserves the illustrated record of the expedition to the fabled land of Punt that she ordered. There are several well-preserved mortuary temples including that of Ramses III at Medinet Habu. The Valley of the Kings contains the famous tomb of Tutankhamun, the tomb of Ramses VI with its astronomical ceiling, and that of Thutmose III. The Valley of the Queens holds
the magnificently restored tomb of Ramses II’s chief wife, Nefertari. Any Theban palaces, built of mud brick, have long since vanished. Even the grand palace of the opulent Amenophis III at Malqata on the west bank has disappeared. However, the site of the craftsmen and artisans’ village at Deir el-Medina and their tombs opens a window into the lives and hopes of ordinary Egyptians. 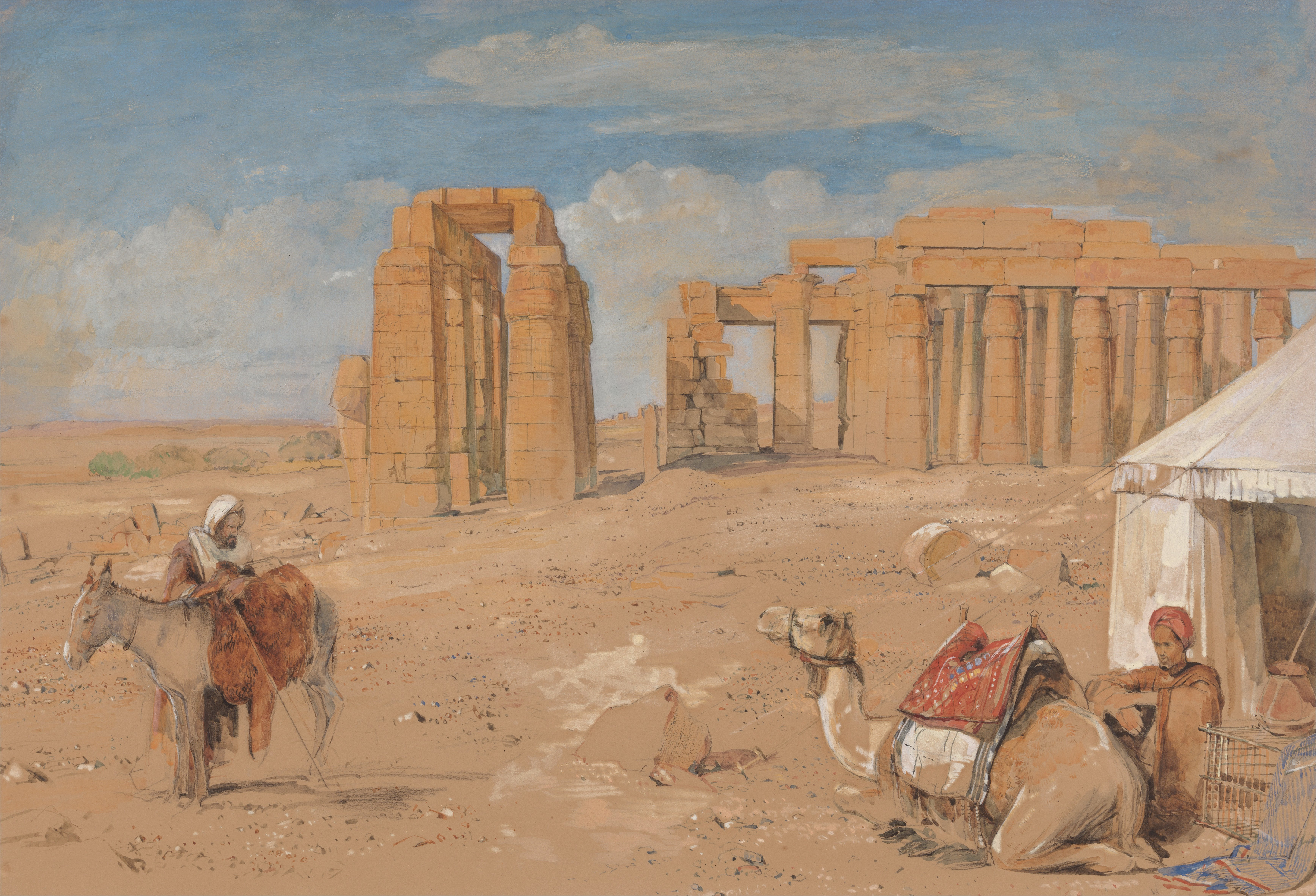