The migration of the Croats to the Adriatic took place during the VII century. The Byzantine emperor Heraclius I did not oppose the expansion of the Croats and Serbs to the Balkans, as he was engaged in the struggle against the Sassanians in the east and the Avars in the Balkans where the Slavic tribes to were considered to be allies in the fight against the Avar Khaganate.

In the 7th century, the first Croatian Duchy emerged – Primorsk Croatia . From the 9th century, it was ruled by princes of the Trpimirovic family.

Establishment of the Kingdom

Tomislav was the founder of the Trpimirovich dynasty of the Croatian kings. Within 5 years (923-928) Tomislav united Pannonia and Dalmatia as part of Croatia, and in 925 he assumed the title of King of Croatia. Pope John X sent a letter to Tomislav (a copy of this letter from the 16th century was preserved), in which he called it “Rex Chroatorum” (King of the Croats).

The land of the kingdom was divided into 11 “counties” (regions) and Banovina (that is, possession of the ban ). The largest of the lands that made up Croatia were Pannonia, Dalmatia, Bosnia and Slavonia. Each region had its own capital.

Soon after the formation of the kingdom, Tomislav came into conflict with the king of Bulgaria, Simeon the Great. The king made an alliance with the Byzantine Empire, which allowed Croatia to use Byzantine cities in Dalmatia until Tomislav fought with Simeon. In 926, Simeon of Bulgaria attempted to break the Croatian-Byzantine treaty, for which he sent a huge army led by the duke Alogobotur against Tomislav, but the army of the Bulgarians was defeated by the Croats in the battle on the Bosnian hills. According to the treatise of Konstantin Baryanorodny “ On Empire Management ”, Tomislav’s army numbered 100,000 infantrymen, about 60,000 cavalry troops, 80 large and 100 small warships. King Tomislav died in 928.

During the reign of Tomislav, two Split church councils took place in 925 and 927. It was to the first Split Cathedral that a papal diplomatic letter was sent, in which he confirmed the royal title of Tomislav. The pope called for romanizing the Roman liturgy in Slavic at that time in Croatia, in return promising diplomatic assistance in resolving the conflict with the Bulgarians. The councils agreed with the papal calls for the transfer of worship in Latin, the party of supporters of the Slavic worship, headed by Bishop Nina Grgur was defeated. Another decision of the councils was the transfer of the diocese of Nin and the diocese of Sisak under the authority of the Split archdiocese, which from a church point of view obeyed the pope, but was politically dependent on Byzantium, and not on Croatia. The decisions of the cathedral, however, faced resistance, the Slavic liturgy continued to be served, largely due to the fact that many Croatian priests simply did not speak Latin. Pope Nicholas II even threatened to excommunicate anyone who ordains a Slavic priest who does not know Latin, but even after that, the use of Slavic liturgy continued in certain parts of Croatia for a long time.

In the 10th century, the government system underwent significant changes. The specific governors (zupany) were replaced by crown officials. King Zhupanov took the land under his personal submission, essentially creating a feudal system. Previously free peasants have now become dependent. The peasants also ceased to form an army, which dealt a crushing blow to the military aristocracy.

King Tomislav was succeeded by his younger brother, Trpimir II (928-935). After the death of his principal enemy, Bulgarian Tsar Simeon I, Constantinople ceased to need Croatian military assistance and demanded that the rich Adriatic cities should return to the nominal administration of Byzantium and pay taxes to the imperial and not the Croatian treasury. The struggle for the return of Dalmatian cities under the authority of the Croatian kings will be the main task of Croatia for the next decades.

During the reign of Trpimir, a church conflict continued between supporters of the romanization of the liturgy and supporters of Slavic worship. Pope Leo VI approved the decision to liquidate the Ninsk diocese and transfer Bishop Grgur, the main supporter of the Slavic liturgy, to the small town of Skradin.

According to the treatise “On Empire Management” of Emperor Constantine VII Porphyrogenitus under Trpimir II, Croatia had a merchant fleet that allowed it to trade throughout the Adriatic.

The son of Trpimir II, Kresimir I (935-945) maintained good relations with Byzantium and Rome and stability in the country, but after his death the first civil conflict broke out in the kingdom. The son of Kresimir, Miroslav Kreshimirovich (945-949), was killed by his advisor, Ban Prbina. This caused an internecine struggle in Croatia, during which the country’s economic and military power weakened so much that the Serbian ruler Caslav Klonimirovich easily annexed parts of Pagania and Bosnia, as well as the islands of Brac , Hvar and Vis. 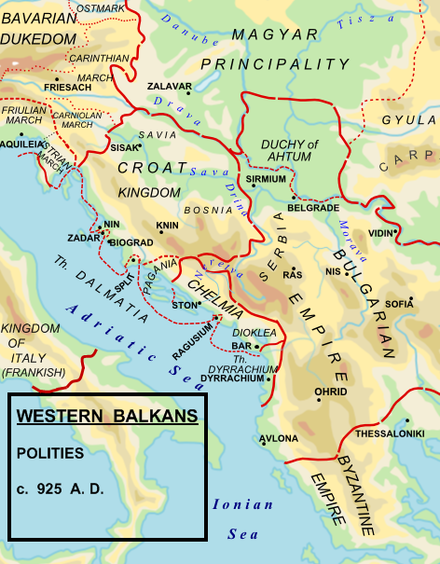 Nevertheless, King Michael Krešimir (949-969) managed to stabilize the situation inside Croatia and regain control over part of the lost lands. He maintained good relations with Dalmatian city-states and conducted an active religious policy, in which his wife, Elena Zadarskaya, actively assisted him. Under her order, the churches of St. Stephen the First Martyr and the Virgin were built in the city of Soline. Mikhail Kreshimir was succeeded by his son Stepan Dřislav (969-997). The reign of Dřislav was the longest in Croatian history, 28 years. He managed to restore relations with Byzantium and improve them. Improving relations with Byzantium occurred against the backdrop of a new conflict between the empire and the Bulgarians and the traditional attempt of Constantinople to enlist the support of the Croats. The empire again agreed that the Adriatic cities would transfer taxes to the Croatian treasury, which led to a dramatic improvement in the financial situation in the kingdom. In 988, Emperor Basil II sent the King of Croatia royal insignia.