Batu Khan’s trek to the west, which began in 1236, was largely dictated by the Mongols’ desire to finally destroy the Polovtsian (Kuman) horde, the remnants of which took refuge in Hungary after the defeat of the Polovtsi in the southern Russian steppes. In the spring of 1241, having devastated the Galitsko-Volyn principality, the Mongolian army with several detachments crossed the Carpathians. Batu Khan broke through to Hungary in the north, through the Russian Gate, Buri and Kadan – through Moldova to Transylvania, and Bucek – through Wallachia from the south. The main forces under the command of Subadei moved along the path of Kadan (at the same time a significant part of the Mongolian troops invaded Poland and passed through it without much resistance). 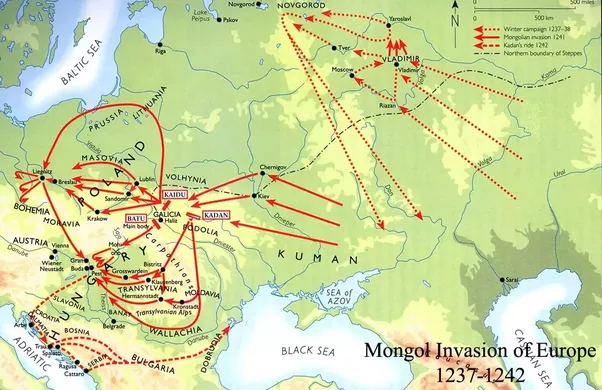 Bela IV assembled troops near Pest, while the advanced units of the Hungarians were defeated on March 12, 1241. On March 14, several Hungarian barons dissatisfied with the king’s union with the Polovtsian horde killed the main khan, Kotyan, and other noble Polovtsians. After that, the Polovtsy left Bela and moved to Bulgaria. On March 15 the younger brother of Batu Khan – Shiban went to the camp of the Hungarian king. Bela IV first adhered to defensive tactics, but when the Hungarians became aware that the Mongolian forces were twice as inferior in number, and a large part of the Batu Khan’s army were Russian recruits, he decided to give the Mongols a battle. A few days later the Mongols retreated, having gone about half the way back to the Carpathians, then on April 11, 1241, Batu suddenly attacked Bela’s army and inflicted a complete defeat in the battle on river Mohi, Bela IV fled to Austria, to the Duke Frederick II, the Warmaster, to whom for help he gave his treasury and three Western committees. The Mongols seized the whole territory of Hungary to the east of the Danube, had already appointed their governors and made raids to the west, reaching the outskirts of Vienna. But the Czech King Wenceslas I, the One-eyed and Austrian Duke Frederick the Militant, successfully fought off all the raids of the Mongols; although Kadan with his detachment passed through Croatia and Dalmatia to the Adriatic Sea, the Mongols did not have time to gain a foothold in Hungary. In December 1241, the Mongol Hagan Ogedei died; according to Mongolian customs, for the period before the election of a new kagan, all military operations should be interrupted and gathered at a kurultai in Mongolia. It was expected the election to the throne of Guyuk-Khan, Batu-Khan’s personal detractor. Under these conditions, the Mongols decided to leave Hungary and in 1242 began a retreat through Serbia and Bulgaria to the southern Russian steppes.

After the withdrawal of the Mongolian army, Hungary lay in ruins; a traveler could travel around the country for 15 days without meeting a single person on the way; hunger was so great that they sold human meat. Epidemics raged, packs of wolves prowled everywhere, they even besieged villages. However, Bela IV did his best to rebuild the economy, settled the Germans (in the north) and the Vlachs (in the southeast) in deserted places, allowed Jews to enter the country, and provided the Polovtsy (Kumans) not only land for nomads (between the Danube and Tisa) ), but also made their horde part of the Hungarian army. Hungary quickly came to life and again became a strong and powerful kingdom.

The 10 Grusome Steps of the William Wallace Death

After the execution of William Wallace, his body was cut into four pieces and shown around the country to demonstrate what would happen to rebels.
Read more
Diseases and Famines

Before the “Great Famine” As a result of the English colonization of the XII — XVIII centuries and repressive anti-Catholic laws of the indigenous Irish...
Read more
People

Of course, The Maid of Orléans is one of the most remarkable figures in history: of any kind, of any gender, of any age.
Read more
Medieval History

A generation later after their deaths, the Folvilles were celebrated as Robin Hood-like outlaws who righted the wrongs of bad government.
Read more
Load more