Richard Lionheart – The King Killed By a Boy 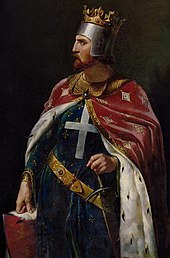 Richard I, also known as “Richard Lionheart”, was born with royal blood which allowed him to receive the best education.

Richard’s dynasty was from French origins and it was believed that Richard did not know how to speak English.

The “Lionheart” had two older brothers. This made it harder for Richard to claim the throne.

One of his brothers had died earlier which left two brothers who could claim the throne.

Henry II was Richards’s father and his mother was Eleanor of Aquitaine.

The brother that came before Richard was called Henry and later he would also be known as “The Young King”.

Some sources state that Richard was a tall man with a lot of strength. He had a strong and healthy build contrary to his brother who was considered short.

Richard’s brother, Henry the Young King, had the first claim to the throne and he wanted to press it.

His father Henry II was still alive and his mother, who was of French origin, was believed to have pushed her sons to start a rebellion against their father.

Henry and Richard rebelled against their father Henry II. Before this, Henry gave lands to his sons and was readying the throne for his son, but Henry the Young King didn’t wait.

The three brothers that rebelled against their father swore an oath with the French king Louis VII.

He gave them support and they went to England in order to confront their father. Henry raised a good army and defeated his sons winning the rebellion.

Richard was the first of the brothers to beg for his fathers forgiveness.

Following this, everything was getting back to normal but suddenly Henry the Young King died and Richard became the first claimant to the throne.

In 1189 Henry II died and Richard was soon to be king. He was crowned with the ceremony held in Westminster Abbey.

The problem with Richard is that he wanted an “adventure” of a sort. He didn’t care he had a big kingdom to run and started planning for the crusades. But why?

The rulers were looking out for their kingdom’s interests and political benefits.

King Richard made a deal with King Philip II.

After failing to capture Sicily, King Richard then successfully attempted to overthrow the King of Cyprus. This was advantageous as it provided store supplies and other benefits for the coast.

In the meantime, The Holy Roman Emperor’s death allowed the French and English crusaders to take over the Holy City.

They soon moved over to the coast and started planning the attack. They attempted to fight against Saladin but lost. Richard then negotiated a truce with Saladin and returned home.

Richard Lionheart’s death was rather peculiar for a king of that time.

He was killed by a boy.

Whilst heading home, Richard II encountered an Austrian Noble, Leopold, who he had a previous conflict with.

Leopold captured the King and held him hostage. The King was eventually passed to the Holy Roman Emperor Henry VI.

The King was excommunicated and held prisoner. Lionheart was finally released following a huge ransom that was paid.

Back in England, King Richard was stopping revolts and fighting against King Philip II. He got the nickname “Lionheart” for being brave. It’s interesting that he is better recognised by his nickname.

The Lionheart’s end came during a revolt at a siege to the castle of Limousin. Late at night, he was riding his horse and an arrow struck his neck. The wound was not fatal at the time.

The arrow was stuck by a little boy named Pierre. The boy’s father and brother were killed by King Richard and he wanted revenge. Although Richard forgave Pierre, they murdered him afterward.

The wound had then worsened as it became infected and untreatable. This wound eventually ended King Richard’s life.