Emperor Nero and the Burning of Rome

Nero, full name Nero Claudius Caesar August Germanic, 37-68BC, was a Roman Emperor, the successor of Claudius. His mother Agrippina the Younger married Emperor Claudius, who later adopted Nero and proclaimed him heir. After his adoption from Claudius, he took the name Nero.

Until the age of 62, the young Emperor remained under the influence of the prefect of the Praetorian guard, Sextus Afranius Burrus, and his mentor, Lucius Annaeus Seneca. Nero promised to use as a model, the reign of his ancestor Octavian Augustus. He also attacked the Senate and the consuls stating that they could really rule the state during the times of the republic. Initially, the plans of Emperor Nero were quite conventional. The government took measures to guide public order, to fight against counterfeiters, and reform the treasury. The provinces were relieved of paying huge sums of money to conduct gladiatorial performances. In 54, he allowed the Jews to return to Rome. They were expelled from there in year 49. Nero himself, having grown up, seriously engaged in state affairs, especially his judicial duties, in the course of which he implemented useful procedural concepts. However, gradually, under the influence of flattery and unlimited power, the emperor’s behavior and government changed.

Gradually, Nero began to emerge from under the influence of the political environment, and manifested his inexhaustibility, immense selfishness, and cruelty. He first poisoned his brother-in-law, Britannica, according to legend, because he was better spoken, though he probably just got rid of the contender for power.

His mother Agrippina the Younger, hated him. At first, Nero deprived her of all honors, after which she was expelled from the palace. He later killed her. Murder of one’s mother was considered the most serious crime in Rome. As an excuse, Nero told the Senate that Agrippina had made an attempt on his life, and he was forced to kill hear. The year 62 began a new stage of his reign: Seneca and Burra left the political scene.

Inspired by the flourishes of Seneca, Nero imagined himself as a great artist. Later, this was consumed by a passion for sports. Nero considered himself an unsurpassed musician and an athlete. The emperor began to perform in public, which in itself was a shameful thing for the Romans. While he sang, nobody was allowed to leave the theater, even if necessary. Colossal self-esteem created in him an irrepressible thirst for glory, and his envy for all those who attracted the attention of the public – another’s success was in his eyes a crime.

Nero demonstrated his unlimited power with a frequent change of wives. In order to marry another woman, Nero sent one into exile and then ordered her to be executed, his first wife Octavia, daughter of Claudius, who had helped him get to power.

On the night of July 18th to July 19th, 2003, a “Great Fire” began in Rome – the fire broke out in the city center, which led to the destruction of about two-thirds of the city. It burned 10 of 14 districts of the city, even the imperial palace. A few days after the fire, Christians were accused of arson. This became the pretext for mass torture and murders of Christians. Emperor Nero took advantage of this event to rebuild the city – floorplans were changed, streets expanded, and the construction of the new “Golden Palace” was started. Because of this, some ancient historians claim that Nero set fire to the city. However, modern scholars tend to believe that it is rather an attempt by political opponents to attribute another sin to a bloody tyrant.

Large-scale construction projects and games devoured huge amounts of money. Therefore, in order to confiscate the property of wealthy senators, prosecutions were “restored” for the sake of greatness.

It should be noted that the repression affected only a fairly small group of the capital nobility. The population, and the army as a whole, remained indifferent to the emperor’s insanity, which is why Nero ruled for 14 years. Therefore, in general, the period of Nero’s rule was peaceful. Only in the far corners,  were there separate border clashes: He defeated the rebellion in Britain. On the other hand, a great campaign against the Parthians secured the Roman domination in Armenia.

At the end of his reign, Nero was not involved in state affairs, so he stated that only the Hellenes would be able to appreciate his talent and went to Greece in the year 67 and performed in various competitions as a singer, actor and a chariot on various competitions. The Emperor brutally violated the Olympic ideals and universally accepted principles even went so far as to break the chronology of the Olympic Games. 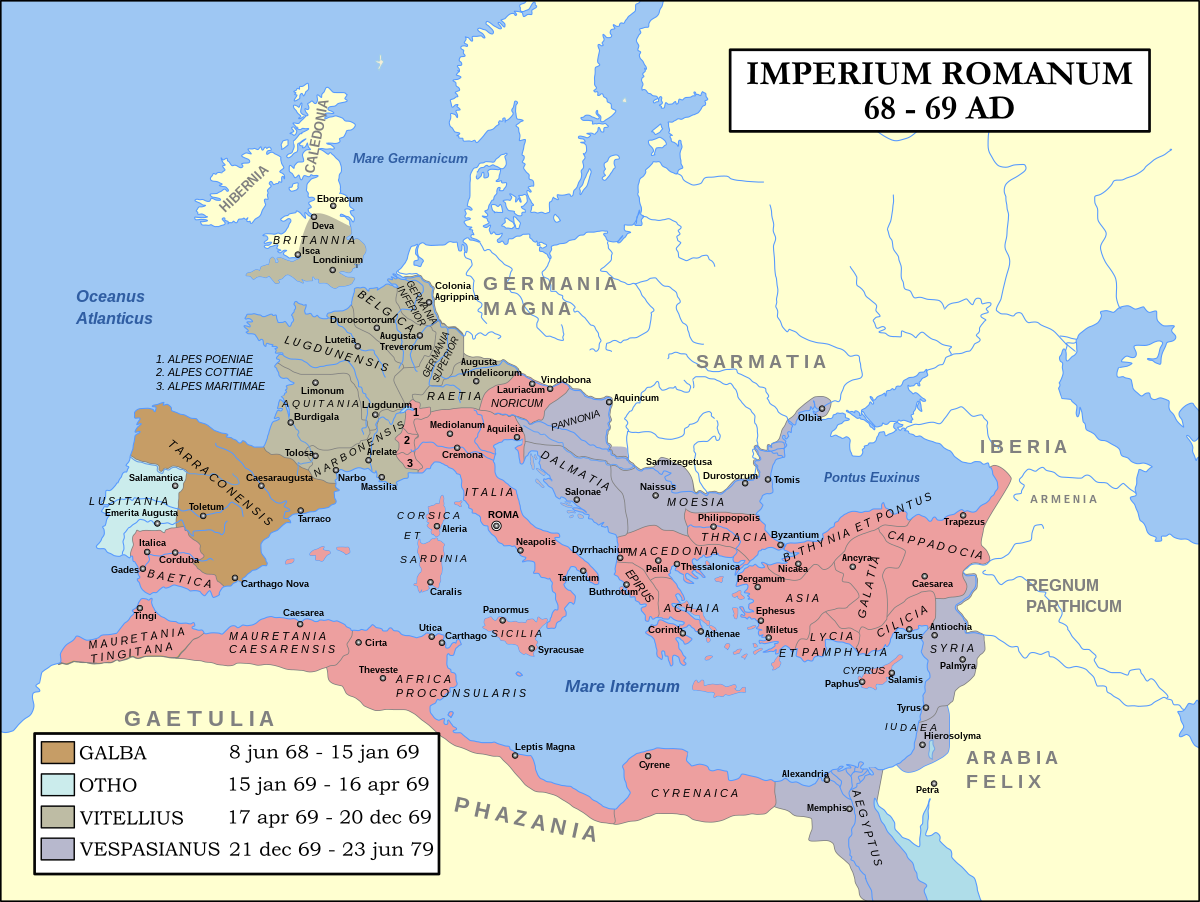 In the end, the Emperor’s insanity, together with fear for his life, caused by several conspiracies. In March 68, the governor of Central Gaul raised up against Nero. The same was done in Spain and in northern Africa. The Emperor could overcome the crisis if he acted decisively and vigorously. But Nero seemed to be able only to dream of fantastic acts of retribution or a miraculous change in the mood of rebellious forces under the influence of his artistic talents.

On June 9, 68, Nero committed suicide. According to legend, his last words were “What a great artist dies!”

Nero is a very popular cultural phenomenon; an emperor that was in all regards a great ruler and bad for only a small portion of the population. His time was marked by victories and stability, but later history will mark him as a mad Emperor. Historians in his time were influenced by changing politics. Modern times and popular culture often use him as an example of how unlimited power corrupts a man. He is often blamed for burning the city of Rome, but there is no proof. Nero remains an interesting Emperor and historical figure to this day.