The attacks of the Scandinavian Vikings on the coast of Britain began at the end of the VIII century. Initially, these were the Norwegians, who in 793 pillaged Lindisfarne, and soon founded colonies in Ireland, on the Orkney and Shetland Islands. In the first half of the 9th century, Danish raids began. The disintegration of the English state in the middle of the 9th century allowed the Vikings to proceed to the systematic conquest of England. The first large Danish army landed on the coast of East Anglia in 865, led by Ivar and Halfdan, the sons of the Danish king Ragnar Lodbrok. Having made East Anglia its ground base, in 866 the Vikings captured York, and the following year defeated the army of Northumbria and put their protege Egbert I on the throne of this kingdom. Subjugating all of East Anglia, in 870 they moved to Wessex and set up camp in the Reading area. Although the Anglo-Saxons managed to win the battle of Ashdown, this did not stop the advance of the Vikings, and King Alfred the Great was forced to buy a truce. In 873, the Danes seized the eastern part of Mercia and put the rest of their appointee Kelvulf on the throne. Danish military forces were constantly reinforced by the arrival of new Scandinavian troops in England. 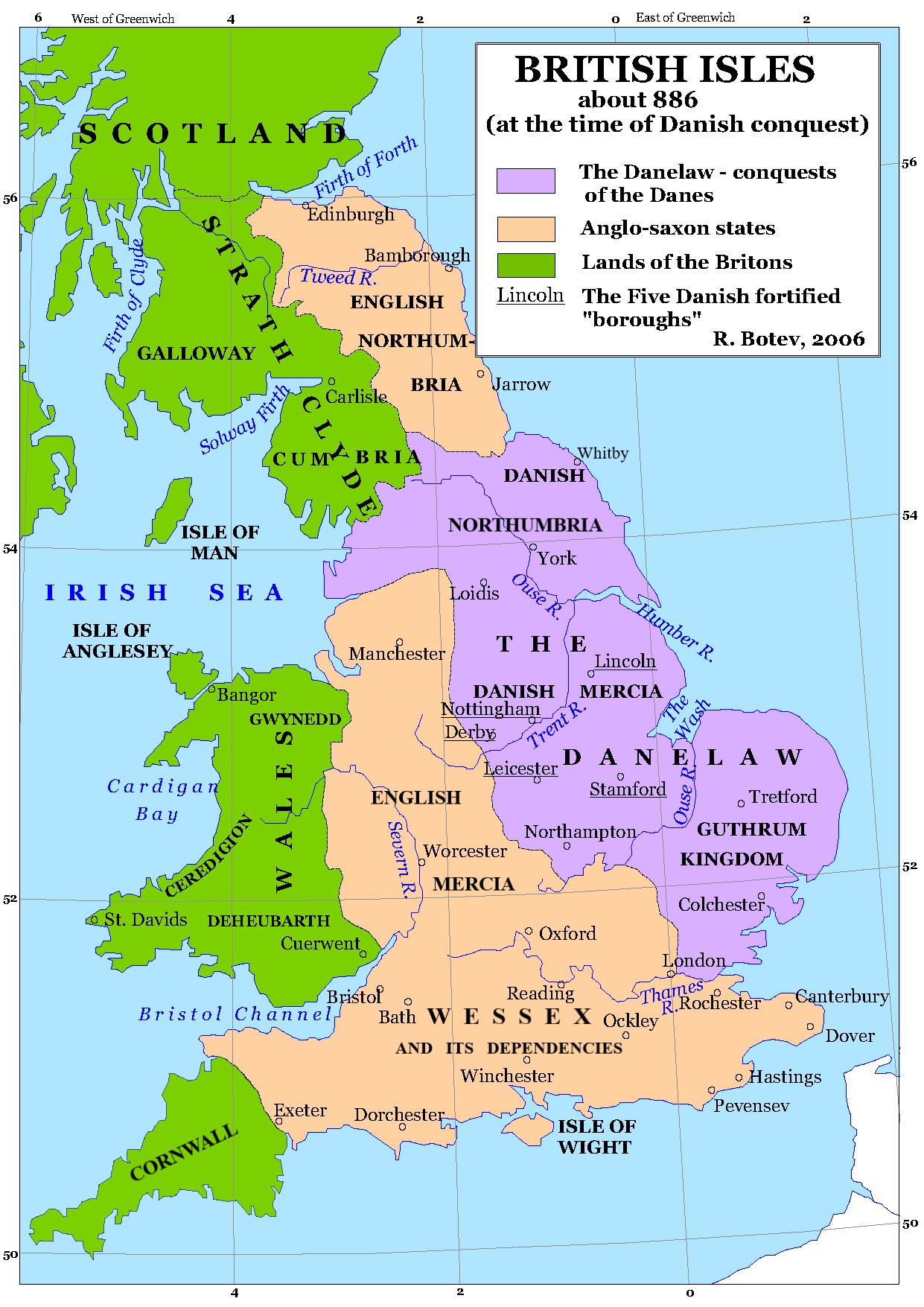 The first territorial division of the conquered lands between the Danish armies, indicating the transition of the Vikings to sedentary life, dates to 876. In 877, several Danes’ armies settled in eastern Mercia, which marked the beginning of the “Five Burgs area”. The advance of the Vikings was stopped only in 878 as a result of the victory of Alfred the Great’s Anglo-Saxon army under Eddington, which ensured the preservation of Wessex’s independence and led to the unification of the remnants of the Anglo-Saxon kingdoms into a single state. In 886, Alfred the Great got  London from the Danes and concluded a peace treaty with Guthrum, the Viking leader of East Anglia, who recognized the independence of both states and established the western border of the Danish possessions. This document laid the foundation for the existence of Danelaw as a special state entity governed by its own laws. The treaty of 886 also fixed the civil equality of the Anglo-Saxons and the Vikings in the territory of Danelaw. In 892 – 896, a new Viking army landed on the coast of Wessex, and the Danes of East Anglia and Yorkshire came to the rescue. However, King Alfred managed to create a national defense system and his own fleet, which allowed the Vikings to fight back.

By the beginning of the X century, the Scandinavians occupied the territory from the Thames to the Tis, moved to a sedentary economy and created their own social organization. There was no political unity between the various Danelaw territories, but in the event of war they united against the Anglo-Saxons. By the systematic offensive on the Danish lands, the Anglo-Saxon state passed during the reign of Edward the Elder. By the year 919, after several years of uninterrupted campaigns in Danelaw, the power of the Anglo-Saxon monarchs was recognized by all of England south of the Humber. The entry into England, however, did not entail changes in the ethnic composition, social structure or the introduction of Anglo-Saxon law. Danelaw remained a virtually autonomous region. However, while the English kings regained their power in Central England, Norwegian Vikings from Ireland invaded Northumbria and established their own independent kingdom in York. In 937, the Anglo-Saxons managed to inflict a crushing defeat on the combined forces of the Scandinavian kings of York and Dublin under Brunanburg, however, already in 939, the Dublin king Olaf I Guthfrisson again occupied York and the next year invaded England. According to the agreement of 940, the region of the former Union of the Five Cities was ceded to him, although two years later this territory returned under the authority of the Anglo-Saxons. In 944, the new king of York, Olaf II Quaran, led the invasion of the Norwegians into England, but the attack was repulsed, and the residents of Danelaw supported the Anglo-Saxon king, which allowed King Edmund I to regain the power of the kings of England over York. In 947, the Vikings re-captured the city. The struggle for York continued with varying success over several decades, until, in 954, when the Kingdom of York finally become part of England.

New Danish raids began in the 990s. In 991, Danish troops looted West Wessex, forcing the English kings to begin collecting “Danish money” – the first historically known universal tax in Britain. Then the raids became frequent. In response to the invasion, the Anglo-Saxon king Etelred II in 1002 organized mass pogroms of the Danes who lived in England. But this did not stop the Vikings, and over the years 1009-1012 the army under the command of Torkel Long destroyed the southern regions of the country. The defense of the country and its morale were undermined. When the king of Denmark, Sven, became head of the Viking army in 1013, the Anglo-Saxon state could not resist the invaders. Residents of Danelaw and part of the Anglo-Saxon residents went over to the side of the Danes. King Ethelred II and his family fled to Normandy. Although after the death of Sven in 1014, Ethelred briefly regained his power in England, in 1016 the military service of the nobility and the clergy of Wessex and Danelaw recognized the son of Sven Cnut as king. Despite the heroic resistance of Edmund Ironbok, the Anglo-Saxon troops were defeated and the country was united under the authority of the Danish dynasty of Cnut the Great. During Cnut’s reign, the Scandinavian element in the English state sharply increased, and the Danish aristocracy occupied leading roles in the country. At the National Assembly in Oxford in 1018, in which both the Scandinavian and Anglo-Saxon kingdom of nobility took part, conditions for the coexistence of two nations within a single state were agreed. Danelaw finally became part of England.