The Use and History of the Facon Knife 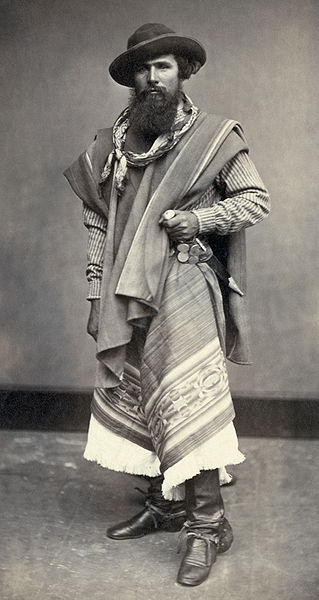 In order to understand the use and history of this knife, we should introduce the Gauchos.

“Gaucho” means a”free man”, a man that is always on the move, a man that does not have a home of his own.

They were simply a South American type of cowboy.

Gauchos had no masters, a so-called adventurer that excels in hunting and riding.

The Gauchos were are a mix of Spanish and Native American blood.

Gauchos first showed up in Uruguay and this movement spread through Argentina and in some parts of Brazil.

They are represented in various cultural legends and in a couple of writings.

They left a pretty interesting mark in these regions.

They were simple and basic people, they didn’t have money and life was much harder back then so they had to adapt and improve their skills for survival.

They had almost no items with them, nothing but the famous “Facon” that they used as a weapon and a lot of times as a tool.

Bellow is an amazing image by one of the sources. The article could be found in the source section and it is amazing and worth checking out.

History of the Facon

The facon knife has roots from the Portuguese faca.

As the Portuguese explorers went through South America, the native people that lived there adopted this particular blade, and pretty soon after the Gauchos got introduced to this knife, and it was a perfect fit for their needs.

This blade is big enough to cause fatal damage to a human being or an animal, and small enough to be concealed perfectly.

This knife is mostly worn on the back of the waist, a perfect position for fast pull-out in a freehand motion.

Because this knife was a fighting knife people used it with one hand while holding a defensive item in the other, mostly a poncho wrapped around the hand for protection and blocking the blows.

The facon is a very beautiful knife when you see it first hand.

It is a well-made knife with an eye-pleasing design.

Sometimes a fuller is added for the bigger blades because it makes it lighter and gives a much better balance when used.

The guard of the facon is not very complicated, usually there are two types of guards an S and U shaped.

This was used for hand protection against another melee weapon.

Overall this weapon starts from a length of 20 cm and could reach a potential length of 50cm.

This is a long blade for a knife and sometimes it can be misguided for a sword.

This knife was used throughout the new age, but as technology advanced this knife lost its use.

Many people still have it mostly for traditional purposes or as an addition to their collection of knives.

About Fredrick I of Prussia He was born in Konigsberg as a third son, this dynasty had a wast reach, he had a first cousin...
Read more
Medieval History

Why do we Idolize Violent Invaders From the Past Such as the Vikings and are Shocked by ISIS?

The Question Okay so one of our readers popped up this question? So we looked at it and seemed like a pretty cool article headline. So...
Read more
Medieval History

The History of Viking Ships and Their Sailing Methods

Ships were an important part of Viking society, not only as a means of transportation but also for the prestige that it conferred on her owner and skipper.
Read more
Ancient History

Would the Fourth Crusade Have Been Successful if it Had Happened in Egypt, as Originally Planned?

Crusades The crusades gave away a good Casus Belli and successfully worked for a period of time. Many kingdoms and especially the pope profited...
Read more
Rome

A Bone Chilling Animation Of The Final Day Of Pompeii

Pompeii along with other nearby villages and villas were in the surrounding area that was mostly destroyed and buried under 5-7 meters of volcanic ash, which was caused by the eruption of Mount Vesuvius in the year 79 CE.
Read more
Load more