The main result of the revolution was the provision of parliamentarism, the rights of the individual, and minor expansion of the ruling class. However, the character of this class remained the same; as the monarchy of the Bourbons was dominated by the big bourgeoisie, so was the July monarchy; but at first it was necessary for them to defend their rights from encroachments of the feudal nobility, as the danger appeared from below, mainly from the petty bourgeoisie and workers who were the republican opposition, which had only a very weak opportunity to act through parliament. Parliament under Louis Philippe was not homogeneous, in it there were successive parties fighting with each other. Yet the most serious and dangerous opposition was outside the chamber. If the main requirement of the opposition in the era of restoration was the observance of the already existing charter, with its freedom of speech and other individual rights, then the main demands of the opposition in the era of the July monarchy were to change the constitution, and the universal suffrage. Among these social classes, socialist doctrines spread throughout the 1830s and 1840s. 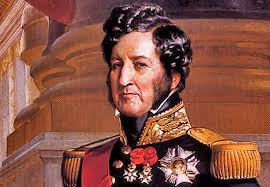 The sensitivists applied their manifesto to the population on July 30, 1830, but only in the following years did they acquire serious significance. In the era of the July monarchy, the main socialist works of L. Blanc, Proudhon, and others appeared. The unrest that filled the first half of the reign of Louis-Philippe was often of a socialist nature. On August 11, 1830, the ministry entered as members of the more radical “movement party”and the more conservative “resistance party”. The first wanted to fight the clericalism and support the democratic movement in the country, the second thought the revolution was over, and tried to put an end to the republican movement. The Ministry relied on former chambers, of which individuals who did not want to take the oath of the new constitution were removed.

November 3, 1830, due to the resignation of Guizot and his supporters, the formation of the office was entrusted to Laffitte. He was to carry out the process of the ministers of Charles Χ, who were accused of treason and betrayed by the Chamber of Deputies to the Peers Court. A significant part of the population of Paris demanded their execution, more than once threatening to seize the prison, which had to be guarded by military force. Four ministers were sentenced in December 1830 to life imprisonment; their process has repeatedly provoked serious street riots, during which public elements, not satisfied with the outcome of the revolution of 1830, wanted to implement a new one.

The supporters of the Restoration Regime fought for power, and the youngest Henry V, the Duke of Bordeaux, who had renounced the throne of Charles X, was nominated to the throne. On February 14, 1831, on the anniversary of the death of the Duke of Berry, they made a demonstration in the form of a solemn requiem in Paris. The masses of people were responsible for the defeat of the church and the house of the archbishop.

In 1832, the widow of the Duke of Berry, attempted to cause a serious uprising in the Vendee where she herself became the head of the insurgents who had sustained several battles with government troops, but was arrested during the fight.

The commercial and industrial crisis that erupted in 1830-1831 and created a mass of unemployed, especially in Paris, as well as the cholera of 1832 caused constant unrest in the country, acted depressingly on the exchange, and placed the ministry in an extreme predicament.

The uprising in Paris took place on June 5 and 6, 1832. It was prepared by the secret society of “human rights”; workers and the unemployed, backed by Polish, Italian and German immigrants, proclaimed a republic and built barricades in some streets, but were scattered after a stubborn battle.

The uprising in Lyon, April 9-14, 1834, was caused, on the one hand, by a strike of workers, and on the other – by severe police measures against political communities. The resistance of workers lasted 5 days, after which barricades were taken down and insurgents were killed, or arrested.

From March 1835 to January 1836, there was a process of 164 accused in the House of Peers for participation in the April uprising.

The last serious uprising took place in Paris in 1839 and was organized by the secret “Society of Seasons”. Another manifestation of discontent were the numerous attempts on the life of the king (at least 7), although they were always committed by individuals or small groups on their own responsibility and not by the thought of the whole party. The most famous of them is the attempt of Fieska, in 1835.

As early as 1830, a law was issued against the insult to Majesty and the Chambers, in 1831 – a law that banned street gatherings, in 1834 – a law that forbade the possession of weapons without permission, and the law on associations, by virtue of which all Associations of more than 20 members needed a preliminary government clearance, which at any time could be taken back. Membership in unresolved associations was punishable by a prison of up to 1 year and a fine of up to 1,000 francs.

The government took advantage of the attempt of Fieska to conduct the so-called September laws (1835) on changing the procedure for legal proceedings in political affairs, the abrogation of the majority of ¾ / 3 votes required so far for jury convictions, as well as the the press law, which recognized the insult of the king in the press as treason. The same press law raised the pledge from daily newspapers to 100,000 francs. However, he could not kill the oppositions press. On the other hand, on October 11 the ministry  passed the law of 1833 on local self-government, replacing the appointed general and district councils with electives, on the basis of a fairly high property qualification. Thus, this liberal law also had in mind only the interests of the rich classes.

In 1836, the ministry of October 11, having changed its president several times, in essence remained the same, due to rivalry between Thiers and Guizot. By this time a new grouping of parties had been formed in the Chamber of Deputies. Most were divided into the right center (Guizot) and the left center (Thiers); between them stood a small and rather colorless third party (Dupin).

The Ministry was succeeded by the Ministry of Thiers on February 11 (from February to August 1836), then by Mole (1836-39), (first with Guizot, then without him), and Soult (1839-40). The last two ministries were personal ministries of the king, devoid of their own will and aspirations. Mole fell due to the unfavorable outcome of general elections for him, Soult due to the failure of the chamber to take the money he had demanded from the Duke of Nemours (the second son of the king) and his bride.

The next ministry, Thiers (March-October 1840), decided to support Muhammad Ali of Egypt against Turkey and the quadruple alliance (England, Russia, Prussia, Austria) and began to prepare for war with the latter; but the peace-loving king resolutely refused to include the corresponding statement in his throne speech, and Thiers retired.

His spot was taken by the Ministry of Guizot (first, until 1847, under the fictitious presidency of Soult), which lasted more than seven years and fell only because of the revolution (“Ministry of Peace”). The positive activities of the Guizot Ministry were extremely insignificant;

“What has been done in seven years? – One deputy spoke in the House in 1847 – Nothing, nothing and nothing! “. This was not entirely accurate.

In 1841 the first French law on child labor in factories was held; and also during the Ministry of Guizot, the construction of railways was underway (by 1850 their network was 2996 km, while in 1840 – only 427), and fortifications were built around Paris. But Guizot’s main task was not to create anything new , but in protecting the existing. His policy, like that of his predecessors in the era of the July monarchy, was only to a greater extent aimed at maintaining and protecting the interests of plutocracy. Exchange speculation, encouraged by the government, has developed to unprecedented levels. Sales and corruptness penetrated the higher realms, to an extent unprecedented from the time of the old monarchy. Rough embezzlement in the arsenal in Rochefort was discovered, with supplies of provisions for the army. Despite this, the overall economic outcome of the rule of Louis-Philippe was a rise in prosperity.

The national wealth has increased significantly, as well as the productivity of the country. The area of ​​cultivated land in 1815 was 23 million hectares, in 1852 – 26 million; the total productivity of agriculture in 1812 – 3,000 million francs, and in 1850 – 5,000 million francs. The manufacturing industry, especially the factory industry, had grown even more significantly. The turnover of foreign trade in 1827 amounted to 818 million francs, while in 1847 – 2 437 million francs. Along with the growth of the manufacturing industry, the working class has grown numerically, which played a major political role under Louis Philippe. These conditions first contributed to the stability of the monarchy of Louis-Philippe, but they, having called to life or strengthened (numerically and economically) the smaller bourgeoisie and workers, prepared its fall.

In the growing dissatisfaction with the existing regime, the unsuccessful foreign policy of Guizot’s cabinet, in particular the issue of Spanish marriages , that had left France and England at odds, played a rather significant role. The opposition movement in 1847 resulted in the form of a banquet campaign, initiated by Odilon Barrot, “striving for reform to avoid a revolution.” The banquet campaign ended in an explosion on February 23-24, 1848, which overthrew Louis Philippe and restored the republican system in France.

Hugh Collongham, The July Monarchy: a Political History of France