The Advancement of the Late Roman Armor and Its Effectiveness

Soldiers who accompanied Julius Caesar’s march into Gaul in the first century BC were the most superb fighting men of their time. From narrative descriptions and artistic renderings it can be seen that they were protected by a bowl-shaped helmet, which also protected the neck; a large oblong shield, measuring approximately 51 by 25 1/2 inches (130 by 65 centimeters) (the scutum); and a solid bronze breastplate (the lorica). The workmanship of the various armor pieces was often extremely skilled. The helmet and breastplate were made of bronze beaten to shape, while the shield was constructed from layers of wood, usually three, glued together. Each layer was made of strips 2.4–4 inches (6–10 centimeters) wide; the outer pieces were laid horizontally, the inner piece was laid vertically, and the whole was covered in canvas and calf hide. A long wooden boss ran the entire length of the shield. Although no metal was used in the construction of the Roman shield, it was heavy, weighing an estimated 22 pounds (10 kilograms). However, because of its shape and size, the soldier did not necessarily have to wear greaves, and this gave him greater freedom of movement and, generally, a fairly quick speed. 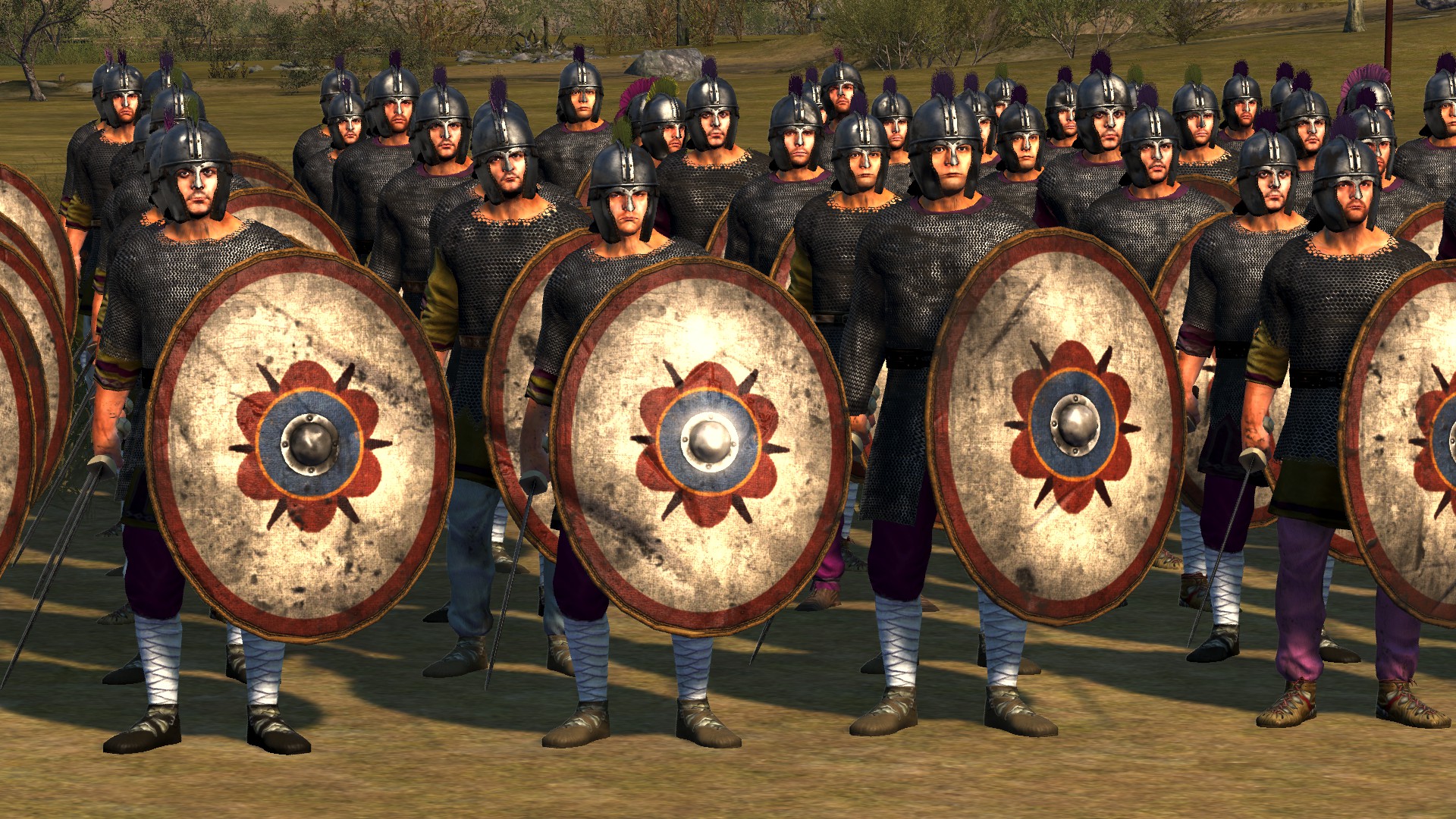 The bronze helmet of earlier Roman soldiers also changed during the second and third centuries; it was replaced by a more carefully designed helmet, made from an iron or bronze skull-plate or cap with either bronze or iron reinforcing bars crisscrossed or ribbed over it. This skull-plate or cap continued down over the back of the neck, ending in a neck-guard that angled out several inches over the soldier’s back. The front of the skull cap ended in a peak formed by turning out the metal of the skull cap or adding a separate bronze or iron bar to the front of the helmet. The sides of the face were covered by ear- and cheek-pieces made of single bronze plates and attached to the helmet by a hinge at their upper edge and fastened together at the chin. Gravestone carvings and other illustrations show that this was a particularly favored helmet style throughout the third and fourth centuries, although from the same sources it appears that older models did continue to be worn. Some helmets were also fitted with a mail aventail to further protect the neck, and mail coifs were known, although evidence of both is rare. Roman soldiers would also have worn a padded or quilted “arming cap” made of leather or wool under their helmets.

Although some late Roman shields were still the same length and width as previous ones, they were now more rectangular and curved to fit the body. A mid-third-century rectangular shield excavated at Dura Europos measures 40 by 33 inches (102 by 83 centimeters). They continued to be made of wood glued together in layers—the Dura Europos shield was made of strips measuring 1.2–3.1 inches (3–8 centimeters) wide and 0.6–0.8 inches (1.5–2 centimeters) thick—and covered in leather. However, they now had applied gilded or silvered decoration, a large metal domed boss, and rims of wrought iron or bronze around the edges. Oval shields also appeared at this time. An example from Dura Europos measures 42–46.5 by 36–38 inches (107–118 by 92–97 centimeters) and is constructed of 12–15 poplar wooden planks 0.3–0.5 inches (0.8–1.2 centimeters) thick glued together. A horizontal bar, riveted only on each side, reinforced the inside of the shield and provided a wooden grip that was anchored on the front by a large domed boss measuring 7.3–8.5 inches (18.5–22 centimeters). The shield was covered in leather or fabric, like earlier examples.

During the second and third centuries AD, Roman armor changed, and the hard, solid, and immobile breastplate was replaced by a more flexible cuirass (a lorica segmentata). Six or seven thick horizontal bronze strips were attached by hooks and buckles onto a leather undergarment to cover the lower chest and stomach area to below the waist. The shoulders were covered with several curved strips of bronze secured to a pair of front and back metal plates that were attached to two sets of horizontal strips that protected the lower part of the body. This allowed the wearer much more freedom of movement than did the solid lorica worn by Caesar’s legionnaires, and it could also be taken apart easily for transportation and repair. The lorica segmentata was still in fashion at the time the Arch of Severus was built in Rome; the arch depicts soldiers wearing it in 203 and it seems to have been used at least through the middle of the third century. There is little evidence, however, that it was worn by soldiers during the barbarian invasions of the fourth and fifth centuries, perhaps because of its technological complexity and the cost of its manufacture. The Arch of Severus portrays not only soldiers wearing technologically complex, expensive lorica segmentata cuirasses but also the more easily constructed and cheaper lorica squamata and lorica hamata armor; evidence also suggests that these had completely replaced the earlier armor by the end of the third and the beginning of the fourth centuries. The lorica squamata was made of a large number of metallic scales attached to each other by leather laces and affixed to a linen undergarment by linen thread. While not as frequently depicted in artistic renderings as the other Roman armors, several finds of this armor have established that the scales were made either of bronze or, more frequently, iron. These measure about 0.6 inches (1.5 centimeters) long and 0.5 inches (1.3 centimeters) wide and are pierced by six holes, two in the center top and two each on the right and left edges. It is not known how a soldier put on this scale armor, and it is not believed that sleeves were attached to the torso-covering cuirass. The lorica hamata was constructed of metal rings. Artistic depictions and archaeological excavations of this mail armor indicate that it was made of alternating rows of rings—measuring 0.3 inches (0.7 centimeters) in diameter and 0.04 inches (0.1 centimeter) thick— punched out of sheet metal or made of wire, with a connecting row of metal wire rings in between. The lorica hamata had the ring ends of each row riveted together or a row of riveted rings alternating with a row of welded rings. Each of the rings was interlocked with four others, two in the row above and two in the row below; 35,000 to 40,000 rings were needed to make an entire armor, including elbowlength sleeves that were always attached to the shirt. The lorica hamata was extremely flexible and durable, and it was pulled on over the head. Both the scale armor (lorica squamata) and mail armor (lorica hamata) covered the torso from the shoulder to at least the middle of the thigh, and some seem to have stretched as far down as the knee. They were worn by the infantry and cavalry. And while they were lighter than the earlier lorica segmentata armor, they were also less protective, sacrificing defense for expense and comfort. Greaves seem to have been regularly worn with both types of armors. Underneath all late Roman armors a garment known as a thoracomachus, in Greek, or subarmalis, in Latin, was worn. An anonymous late-fourth- or early-fifth-century military manual, the De Rebus Bellicis, identifies the thoracomachus as a thick cloth garment that added protection to the armor, but at the same time also helped spread the weight, cut down friction and rubbing, and reduce the heat of wearing it. There are no artistic depictions of this garment, and, not surprisingly, none have survived, but it is thought that they were made of wool, felt, or linen and were padded or quilted. In wet weather a leather garment—made of Libyan hide, says the author of the De Rebus Bellicis—or, later, a hooded felt cloak was worn over the armor. But how protective were the two later Roman armors—the lorica hamata and the lorica squamata—and what did the soldiers think of wearing them? During the fourth century, Ammianus Marcellinus writes that he had seen Roman “infantrymen with shields and crests gleaming with glittering rays, clad in shining mail,” but in the early fifth century, Vegetius is less positive about the Roman soldiers’ attitude toward their armor:

But when, because of negligence and laziness, parade ground drills were abandoned, the customary armor began to seem heavy since the soldiers rarely ever wore it. Therefore, they first asked the emperor to set aside the         breastplates and mail and then the helmets. So our soldiers fought the Goths without any protection for chest and   head and were often beaten by archers. Although there were many disasters, which led to the loss of great cities, no one tried to restore breastplates and helmets to the infantry. Thus it happens that troops in battle, exposed to wounds because they have no armor, think about running and not about fighting.

But did this matter in facing the barbarians? The Romans seem to have been very careful in admitting the Visigoths to the Empire as foederati, forbidding them from bringing their weapons and confiscating any that were found. Of course, some Visigoths no doubt smuggled in their weapons or bribed Roman guards to allow them to keep them. Still, these cannot have been very numerous, and in fact there seem to have been several attempts by the Visigoths to obtain Roman arms during their 376–378 war against the Empire. Certainly, such desperation does not necessarily mean that Roman weapons were seen as superior to those normally carried by the barbarians—although previous attempts to acquire weapons from Roman arsenals by barbarian raiders might suggest as much.