The Pyrrhic War (280-275 BC) was a series of military conflicts involving the Greek states (Epirus, Macedonia and the city-states of Great Greece in Southern Italy), Romans, Italic peoples (primarily Samnites and Etruscans), and Carthage in the composition of various political alliances.

The Pyrrhic War began as a minor conflict between Rome and the city of Tarentum over the violation of a naval agreement by a Roman consul. Tarentum helped the Greek ruler Pyrrhus Epirus in his conflict with Kerkyra, and asked, in turn, for the military aid of Epirus. Pyrrhus fulfilled his obligation to Tarent and was involved in a complex struggle with Rome. Pyrrhus also intervened in the internal political conflicts of Sicily and the struggle of Sicilian Greeks against the Carthaginian domination.

The intervention of Pyrrhus in the Sicilian conflict markedly reduced the Carthaginian influence on the island. In the end, the war did not lead to any major territorial changes in Italy but nevertheless, it had important historical significance. The Pyrrhic War clearly demonstrated that the states of ancient Greece essentially became incapable of defending their independent colonies, and Roman legions competed with the armies of the Hellenistic states for dominance of the Mediterranean basin. The victory paved the way for the Romans to dominate the city-states of Greater Greece and helped strengthen the power of Rome in Italy. The military achievements of Rome intensified his confrontation with Carthage, which reached its culmination in the Punic Wars.

The Pyrrhic war is the source of the expression “Pyrrhic victory”, meaning victory with unreasonably high losses. This expression is attributed to Pyrrhus biographer Plutarch, who described his reaction to the report on the victorious battle: The signal for the retreat was given by both sides, and they say that Pyrrhus noticed to some who rejoiced at the victory, “If we have one more victory over the Romans, we will definitively perish.” 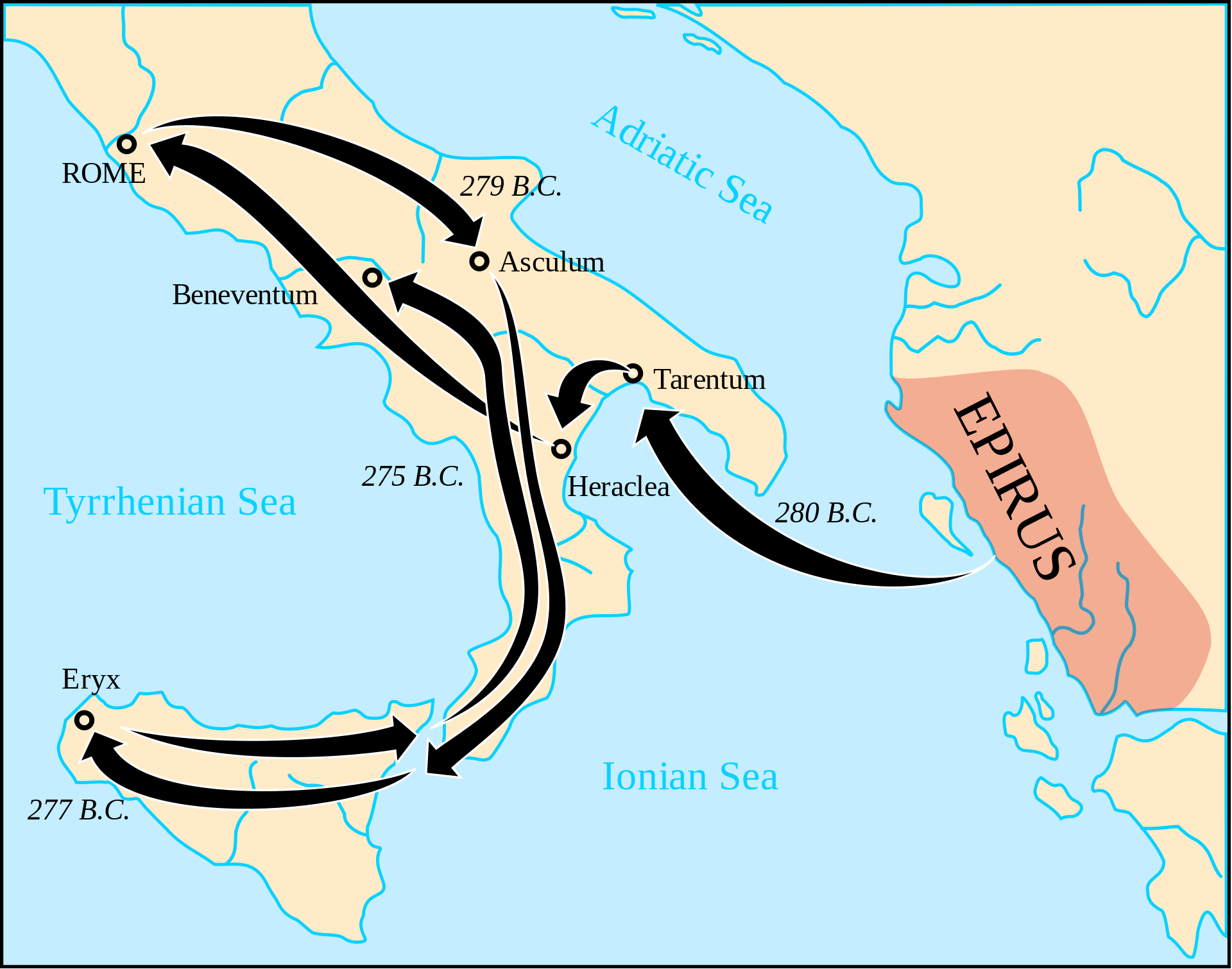 The main source of the Pyrrhic War is the life story of Pyrrhus, written by Plutarch and included in the Comparative Biographies. Plutarch relied on the testimony of a contemporary of Pyrrus. He also used the work Diodorus of Sicily, author of the “Historical Library”, and Arrian, who described the events after the death of Alexander the Great. Plutarch also used this source when writing the biographies of Eumenes and Demetrius. Also, Plutarch used the memoirs of Pyrrhus but they did not survive.

In 282 BC, Rome appealed to the city of Furies with a request for military assistance in a dispute that flared up with another city. Rome sent a fleet that entered the Tarentum Gulf. Thus, Rome violated the long-standing agreement between it and the city of Tarentum, which prohibited the Roman fleet from entering the Tarentum waters. Enraged by the aggressive act, the Tarentans attacked the Roman ships, sunk several, and the rest were repelled. Rome protested and sent an ambassador to Tarentum. Negotiations ended in a declaration of war. Tarent appealed for help to the king of Epirus Pyrrhus, who considered himself a great commander and nurtured imperial ambitions. Pyrrhus felt that his hour had come, and decided to expand his plans to include conquering the Roman Republic.

The Battle of Heraclea

In 280 BC, Pyrrhus landed in Italy with a 25,000-strong army, including battle elephants. The 50,000-strong Roman army led by Publius Valerius Leavinus was sent to Lucania, where the first battle of Herakleia took place. During this battle, a wounded elephant panicked among the other animals, thus destroying a part of its own army, taking a complete victory from Pyrrhus. Lists of the dead, wounded and missing differ, ranging from 7,000 to 15,000 from the Romans and 4,000 to 13,000 from the Greeks and were very heavy for that time.

This battle showed the stability of the Roman Republic. Pyrrhus expected that the Italic tribes, hostile to the Romans, would support him. However, by that time the Romans had so strengthened their position in the region that only a few cities had come out on the side of Pyrrhus.

Negotiations about peace and the alliance between Epirus and Rome dragged on, so Pyrrhus came out of Tarentum and entered into battle with the Romans near Ausculum. Both sides suffered heavy losses, but still, Pyrrhus won a Pyrrhic victory.

In 279 BC, the Syracusans offered Pyrrhus authority over Syracuse in exchange for military aid against Carthage. The Syracusans hoped, with the help of Pyrrhus, to make Syracuse the main center of the Western Hellenes. Coming to their aid, Pyrrhus openly entered the war with Carthage. Despite this, in 276 BC, Pyrrhus, the sovereign of Sicily, had his own fleet and strong support in Tarentum, on the Italian land. In Sicily, Pyrrhus already had a fleet of 200 galleys and was still planning to build a fleet in Italy. Meanwhile, in Southern Italy, the Romans once again seized the Greek cities of Croton and Lokrami and only Regi and Tarent retained their independence. As soon as Pyrrhus sailed, the Sicilians revolted and overthrew the new monarchy of Pyrrhus, that made huge problems for the new king.

The final battle between Pyrrhus and Rome. In this battle, Pyrrhus was unable to conduct an attack and therefore retreated to Tarentum, and then to Epirus. Thus, the Romans won the “war of attrition”: after all, Pyrrhus relied only on the small kingdom of Epirus, which could not provide the resources necessary for a full-scale war. This war showed that the new power in the west was Rome and the only possible challenger was Carthage. In the next century, Rome would strengthen its position as a ruler of the Mediterranean Sea.

Plutarch . Comparative biographies . Pyrrhus
Pausanias Description of Hellas. Book 12. The War of Pyrrhus with the Romans