In 1217, Pope Honorius III declared a campaign against the Prussian pagans, who seized the lands of the Polish prince Conrad I of Mazovia. Yielding to the persuasion of his Russian wife, the prince asked for help from the Teutonic knights, promising them possession of the cities of Kulm and Dobryn, as well as the preservation of the occupied territories behind them. Frederick II authorized the start of the golden bull in 1226.

The Teutonic Knights arrived in Poland in 1231, settling on the right bank of the Vistula. Here was built the first fortress, which gave birth to the city of Thorn. The Dobrin Order was entrenched in the Dobrin land. While advancing to the north, a number of castles were founded, including Marienwerder, Ragnit, Tilsit, Velau, Georgenburg, Durben, Kandau, Velun, etc.. Entering the Prussian lands, the Crusaders founded the castle of Balga. In 1255, Konigsberg Castle was founded on the lands of the Prussians.

The strategy of the knights was basically the following: they smashed the Prussian tribal alliances opposing them one by one, while the defeated were used as allies in subsequent wars. This made it possible for very few Teutonic knights at first to successfully overcome many times the superior forces of Prussians, and resist during the all-Prussian uprisings of 1242-1244, 1260-1262 and 1278-1280, despite the help provided to Prussians by Lithuanians and princes of Gdansk Pomerania.

Castles were erected at the site of previous Prussian castles, which were simultaneously tribal centers. With the colonization of the Order of Prussia, these castles did not lose their usual significance for the local population, becoming the administrative centers of the territories under their control.

Forced conversion to Christianity did not occur, but due to the active involvement of the Prussian nobility with their retinues in constant wars on the side of the Order with the strongest religious agitation in the order’s environment, many of these Prussian soldiers were baptized. Then, obviously, ordinary members of the tribes took an example from them. 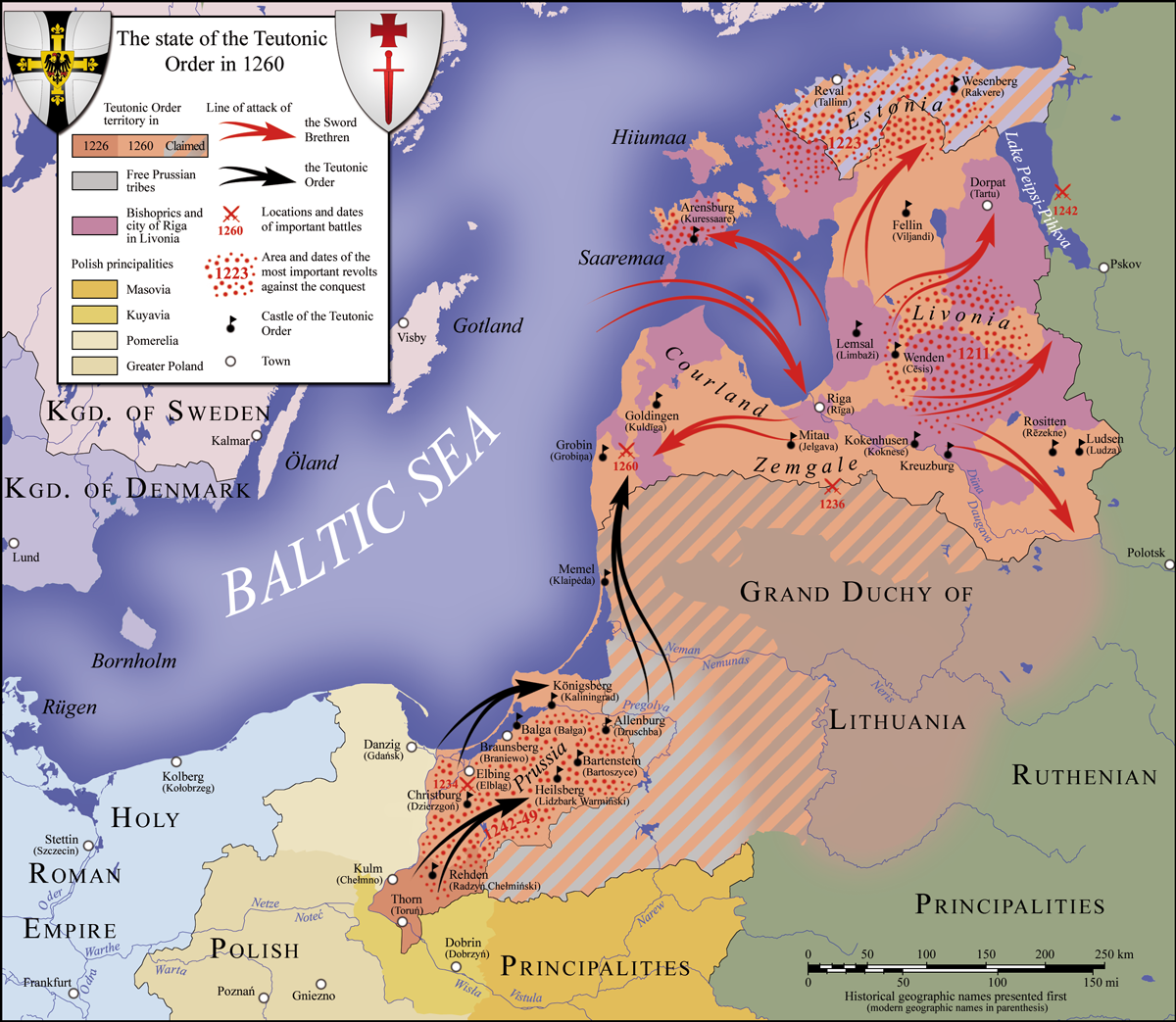 The same can be said about Germanization of the territories captured by the Order. Back in the 14th century, the problem of translators from Prussian was very acute. At the same time, the German language was a prerequisite for success in the state of the Orde . The emergence of “islands” of German settlers eroded the Prussian language array even more. Nevertheless, information about the preservation of the Prussians of their language is found at the beginning of the XVI century.

Despite active operations in Europe, the official residence of the Order, along with the Grand Master, was in the Levant. In 1220, the Order bought part of the land in the Upper Galilee and built the fortress of Montfort. Here was located the archive and the treasures of the order. In 1271, the fortress of Montfort was taken by the Beibars, the leader of the Mamluks, and they forced the residence of the order to be moved to Venice.

Gradually, the whole of Prussia fell under the rule of the Teutonic Order. In 1237, the Teutonic Order absorbed the remnants of the military brotherhood of the Knights of the Sword (Knights of Christ), thereby extending its power to Livonia. In the conquest of Gdansk (1308) under the slogan “Jesu Christo Salvator Mundi” (Jesus Christ the Savior of the World) almost the entire Polish population was destroyed (about 10,000 Christians). German colonists arrived on the captured lands. By this time, East Pomerania was captured. The seizure did not pursue any religious goals. Thus, by the end of the 13th century, the Order, in fact becoming a state, continued the policy of expansion to the East. In 1309 the city of Marienburg became the capital of the Teutonic Knights.