In 476, the entire Roman west collapsed. Mass migrations from the north by the Germanic and Gothic tribes sowed chaos from Dalmatia all the way to Spain, while the leadership of the west disintegrated. Eventually the once mighty and powerful Roman Empire would be reduced to Greece, Anatolia, Cyprus, Crete, Egypt, Tunisia, Moesia, Syria, Armenia and Taurica (Chersonessus). While the west faded from memory, the Eastern half largely prospered through technological advancements, military might, efficient infrastructure and an enriched economy. Most of this success can be owed to their leadership. At times, the empire prospered directly because of the efforts of intelligent rulers and survived cataclysmic events due to the military prowess of these rulers. In this article I will address four of the Byzantine Empire’s greatest Emperors.

Flavius Julianus of the Constantian Dynasty

Julian ‘The Apostate’ reigned from 355-363 CE. Julian’s reign was relatively short, though despite this he quickly mastered the position of Emperor. Julian’s first experience in the field of leadership was in Gaul, where his father assigned him as representative. He would quickly become a figurehead and fight off Germanic invasions. His time in Gaul also exposed him to administration and economics. As tensions between Julian and his father Emperor Constantius grew, the possibility of a civil war grew also, however in 361 Constantius died and Julian was declared Emperor.

Julian was somewhat of an idealist. He saw himself as a man of the people and involved himself in such as well as the inner-workings of the Senate. Julian despised the corruption that he saw infecting the empire and promptly removed many officials that he saw as corrupt, as well as introduce the ‘Chalcedon Tribunal’ which specialized in rooting out corruption. Despite Julian’s success as a ruler he would be demonized by the numerous Christian figureheads of the empire, and in 363 would die at the hands of a Sassanian Lakhmid auxiliary outside Samarra.

Justinian is more complex than most Roman Emperors when it comes to his overall performance. You could argue he performed well as a ruler and use his conquests of the Vandal Kingdom and much of Ostrogothic Italia as points to prove this, or you could take a glance at the end results of his rule that effectively weakened the empire and make its defenseless provinces simple game for the Sassanids. I will argue for Justinian’s place among this list.

Justinian in his early life was a mere peasant born in South-Western Moesia (Modern Macedonia). He was later adopted by Imperial Guardsman Justin, who would later become Emperor. Justin taught Justinian all he knew and enlightened him on the complexities of politics and economics. Justinian would not be alone in his quest to perfect and advance the empires interests. His wife Theodora became an accomplished empress by introducing reforms that gave women new rights and supporting the Monophysite Christians of the empire. Justinian was also lucky to have enlisted the famed General Flavius Belisarius who scored an astounding victory against the Sassanid forces at Dara in 520, Justinian would order Belisarius to undertake one of the most ambitious campaigns in Roman history, to reclaim and re-establish the western Roman world.

Belisarius sailed to Byzacena in Africa and move into Vandalic territory defeating their forces and annexing the kingdom in its entirety, from there Belisarius moved into Ostrogothic Sicily and occupied the Island, most of Belisarius’s campaign was met with little resistance to start with, however in the latter half of the conflict Belisarius would struggle with his advisors and the enemy General Totila. While this was taking place a Byzantine force was encroaching on Ostrogothic Dalmatia, however this army was crippled by an Ostrogoth army, the eventuality of this conflict being the utter destruction of the Ostrogothic Kingdom at the hands of the Byzantines and the Lombard’s from beyond the Alps. While the collapse of the Ostrogoths might lead you to believe it was a resounding Roman victory, you would be wrong, the Lombard’s were intent on pushing back Belisarius’s forces and while Roman grip lasted in parts of Italia for centuries to come the campaign overall was a near disaster. If this wasn’t bad enough the empire was continuously humiliated by the Sassanids of whom won many wars against them during this time, Justinian would die in 562 roughly a decade after his wife Theodora died of Cancer.

In 602 CE former Military Officer Phocas usurped Emperor Mauricius and took the mantle of Emperor for himself, his short rule can be described as tyrannical & corrupt, in response to this the Exarch of Africa (Herakleios) sailed to the Constantinople and overthrow Phocas and promptly executed him, it is worth noting that Phocas purposely hid the entire treasury to spite Herakleios. Herakleios’s reign would quickly be consumed by war as the Sasanians took note of the internal conflict in the Byzantine Empire and as such declared war, this war would be the last war between the Romans & the Persians and would unwittingly allow a third power to assume control. The war would initially be in favor of the Sasanians (led by Khosrau II) however this would change when Herakleios outflanked the bulk of Khsorau’s forces in Anatolia and would strike his contingents in Armenia and struck further into Sasanian territory. In the end Khosrau failed to capture Constantinople despite being aided by the Avars and having a larger force he was still out-done by the Roman forces, the Byzantines eventually won the war but at the cost of their treasury, manpower and infrastructure.

Herakleios would come to see the world completely changed when the Arab Invasion hit the empire in 633, the Arabs swept through Byzantine Egypt, Africa and partially breached the defensive line into Anatolia. Eventually the Arabs would come to possess these regions and would continue to assault Byzantine holdings in Anatolia, Cyprus & Sicily while pushing further into the Iberian Peninsular and Central Asia simultaneously. Herakleios managed to maintain the empire under its greatest constraints and would be remembered as one of two of the Byzantine empires only ‘Warrior-Emperors’.

Basil II also known as Basil the “Bulgar-Slayer” ascended to the throne in 976 CE and his predecessor John Tzimiskes I died in the same year, Basil began his reign fighting rebellions and powerful landowners of which he would defeat with the aid of the Georgians & Rus, the alliance with the Kievan’Rus was frowned upon as the Byzantines considered the Rus barbarians, however the Kievan’Rus leader Vladimir agreed to convert his people to Greek Christianity and so a marriage between Basils daughter Anna and Vladimir proceeded. 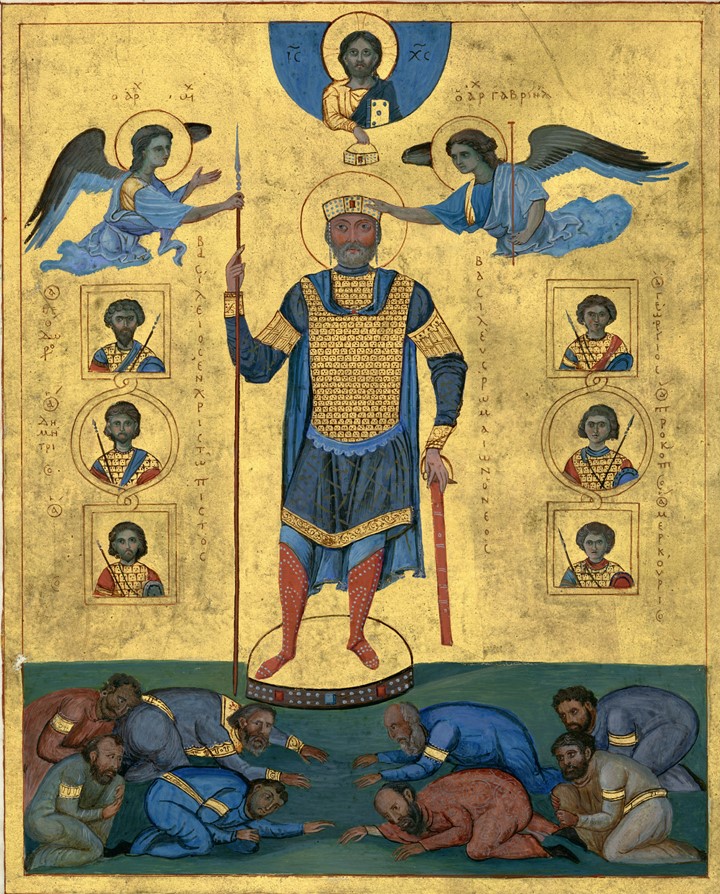 In 922 the Fatimid Caliph Al-Aziz invaded the Emirate of Aleppo, a Protectorate of the Byzantines. The conflict began in the Fatimid’s favour having defeated the Byzantine Doux of Antioch on two occasions and laying siege to Aleppo, however Al-Aziz’s luck would run out when Basil himself quickly appeared in Syria in defense of Aleppo and the Fatimids promptly retreated into friendly territory, the Byzantines taking advantage of this retreat took the city of Tarsus. Hostilities resumed in 998 only to end in 1000 CE with no gains by either side.

The most significant years of Basil’s reign would involve his successful conquest of the Bulgarian Empire under the rule of Samuel I, in 986 Basil invaded Bulgarian territory and sieged the city of Sofia only to lift the siege but was ambushed by Bulgarian forces only to escape with his Varangian Guard, Basil would fully resume the war in 1000 CE when all territories lost during his absence would be retaken and with the acquisitions of Skopje and Dyrrachium the Bulgarians would be on a entirely defensive stance, however the war would be decided at the battle of Kleidion where Basil defeated Simeon and blinded most of his troops only to send them to Simeon where he would died of a stroke. The war would continue for four years after Simeon’s death until its final submission in 1008, after 400 years the Danubian frontier was restored.

Basil II thrived in an odd environment, a ruler that would be considered incompatible with the defensive stance the Byzantines had gotten use to for centuries, even the organization of the empire as a whole was geared towards a more defensive stance (the Theme system), however Basil was successful in waging war and reclaiming territories lost long ago.