Attila, the Hun (“The Scourge of God”) – King of the Huns

Born about 400, Attila succeeded a series of Hunnish chieftains of varying degrees of ferocity and efficiency. Attila ruled jointly over the HUNS with his brother, Bleda, from 434 until 445, when he killed Bleda. He was described as short, the norm among his people, with a snub nose, small eyes, and a disconcerting stare that frightened most who met his gaze. We know that he was bearded, since a contemporary historian related that his beard was “sprinkled with gray” when he met him in
449. Attila was a ruthless natural leader who could inspire boundless enthusiasm and devotion among his followers. He fought his way to the leadership of the Huns and held that position for at least 19 years.

In North Africa, the VANDALS moved against EGYPT in 440. This threatened the food supply of CONSTANTINOPLE and its subsidiary areas, since Egypt was at that time the granary for the Middle East. The Eastern empire was obliged to focus resources on protecting Egypt from the Vandals, thereby facilitating Attila’s assault on the Balkan Peninsula as far as Greece itself.

In about 450 Attila sent word to the Roman court in ITALY claiming Princess Honoria in marriage. His claim was addressed to her brother, the emperor Valentinian III (425–455), although GALLA PLACIDIA, their mother, seems to have been the actual regnant. When his claim was rejected, Atilla moved against western Europe, pillaging west of the Rhine Valley.

Flavius Aetius (d. 454), a Roman general and an old friend of Attila, raised a small force and led it north from Italy. With the help of the Roman governor of Auvergne, he reached an agreement with the VISIGOTHS under their king, Theodoric. The Visigoths and the Romans moved to the relief of the city of Orléans, under siege by the Huns. Attila promptly withdrew. The Huns then marched toward the Rhine Valley. Aetius and Theodoric pursued and caught him in the valley of the Marne River in July of the year 451. In the fierce fighting Theodoric was killed and Aetius’s horse was killed under him. However, at Chalons-sur-Marne, or the “Mauriac Fields,” Attila’s forces were nearly overwhelmed and he withdrew.

Devastating revenge by Attila to the Romans in Italy

In spring 452, Attila marched against the Romans in Italy. He destroyed the important city of Aquileia at the northern end of the Adriatic and then Vicenza, VERONA, Brescia, and Bergamo. Pope LEO I sought a truce with Attila, who met him on the banks of the Mincio River in northern Italy, near Piacenza. After detailed negotiations, Attila agreed to withdraw and led his forces out of Italy into PANNONIA. 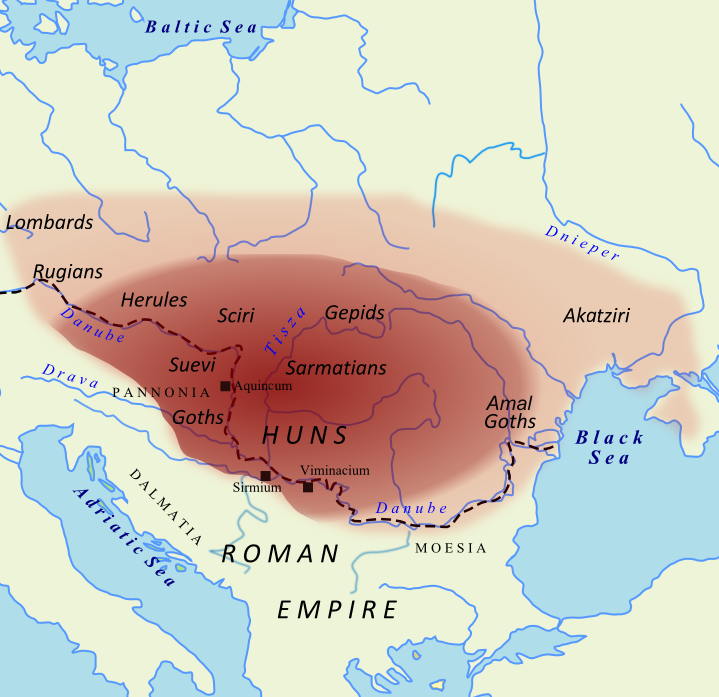 The End of Attila

In 453 an aging Attila married. The wedding involved a huge feast and heavy drinking. According to
some accounts, Attila later collapsed on his bed, lying on his back. He suffered a hemorrhage or a nosebleed, as often happened to him after heavy drinking, and literally drowned in his own blood with his new bride present but uncomprehending. He was buried secretly, and the grave has never been found.