The Ionian revolt lasted from 499 to 493 BC. It was an uprising of Greek cities in Ionia (Asia Minor) against the Persian Empire, and was the beginning of the Greco-Persian Wars. The uprising was caused by discontent among the inhabitants of the eastern coast of the Aegean Sea and Cyprus under the rule of the Persians. The initiators of the uprising were tyrants from Miletus, Histiaeus, and Aristagoras. Initially, the rebels were fortunate and won a number of victories. However, in the end, the Persians completely suppressed the insurrection.

In the Greek Dark Ages, a large number of people from Ancient Greece moved to the coast of Asia Minor. They established city-states that were later conquered by the Persian Empire. The Persians ruled the Ionian cities through the help of loyal tyrants from the local aristocracy.

The uprising occurred on the Greek island of Naxos. A number of wealthy citizens were banished and went to Miletus with a request for help. Aristagoras assumed that by returning the exiles to their homeland, he could become the ruler of the rich island. He went to the Persian satrap and brother of Emperor Darius and persuaded him to provide an army. Meanwhile, the Persians had equipped 200 warships. The Persian commander was Megabat. Preparation for the military expedition to Naxos was conducted secretly. It was officially announced that the fleet was going to sail in the direction opposite to Naxos to Hellespont. However, a quarrel erupted between the two commanders, Megabat and Aristagoras. Angry Megabat sent a messenger to Naxos warning about the impending attack. The Islanders had time to prepare for the siege. As a result, after spending a lot of money, and after a four-month siege, the Persians were forced to return home.

The Beginning of the Uprising

Aristagoras was in great trouble.  First, he did not fulfill his promise to the Emperor’s brother. Secondly, he had to pay large sums for the maintenance of the army. Thirdly, a quarrel with Megabat could cost him his power over Miletus and his life. All these fears inspired Aristagoras rise up against the Persians.

Aristagoras managed to pursue the fleet, which had not yet dispersed after an unsuccessful expedition to Naxos, to rebel. At the same time, Aristagoras renounced the title of tyrant and established democracy in Miletus. The uprising quickly spread to the cities of Ionia.

The uprising began in the autumn. In antiquity, wars were practically never waged during winter. Using this time, Aristagoras sought allies. First, he went to Sparta, where he was refused. Then he went to Athens where he was more successful. Athenians sent 20 ships to help the insurgents. Aristagoras was also successful in Eretria. The trade of this coastal city suffered as a result of the Persian conquests. The Eretrians and Miletus were bound by long-standing friendly relations. The inhabitants equipped five ships to help the rebels.

Persian troops marched to Miletus to destroy the origin of the uprising. Insurgents, instead of going to the aid of Miletus, went to the capital of the satrapy of Lydia and one of the most important cities of the Empire. The governor, brother of the Persian Emperor, was stunned, finding himself in an unprotected city. The Persian garrison retreated to the fortifications. Greeks set fire to one of the houses. Soon the fire spread and enveloped the entire city. Local residents took up their arms and the Greeks were forced to retreat to the coast.

Upon learning of the incident, Persian satraps from nearby territories sent their troops to Sardis. In the ensuing battle, the Greeks were defeated and forced to retreat. The Athenians, despite Aristagoras’ exhortations, went home.

In the Empire’s capital, the destruction of Sardis made a strong impression. The Persians began to act faster and more vigorously, whereas without this event the insurrection would have been considered insignificant. 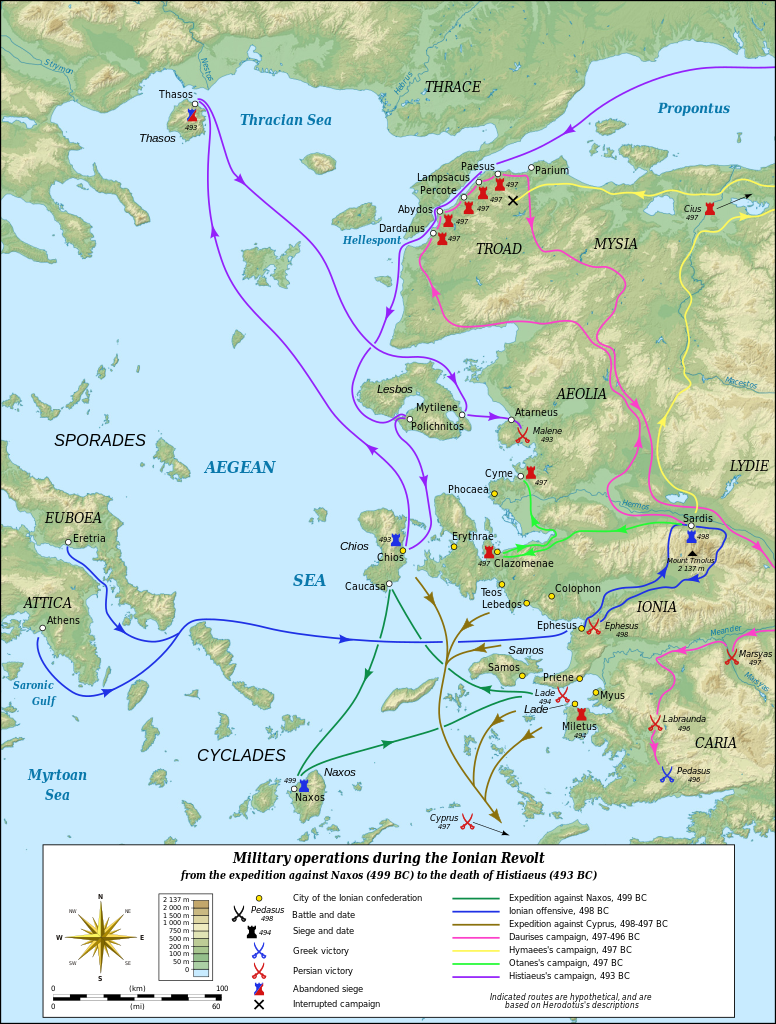 The Counter-Offensive of the Persians

Onesilus, for Cyprus, sent ambassadors to Ionia with a request for help. The Ionians sent their fleet to the aid of the Cypriots. Between the land forces and the navies, a battle took place. The Greeks were victorious on the sea, while on land, the Persians won. After the death of Onesilus on the battlefield, all the cities in Cyprus once again fell under the rule of the Persians.

Sardis became the center of Persian military preparations. Since there was a danger that the Scythians would join the rebellious Ionians, an army was sent to the northwest of Asia Minor. They conquered the region of the Hellespont. The Persians managed to win two victories.  However, the Persians could not take advantage of their success. Upon learning of their movement, the Carians managed to set a trap on the way to the town of Pedasa, in which the entire host of the enemy was destroyed. The destruction of the army forced the Persians to stop the offensive. The next two years 496 and 495 BC passed relatively peacefully.

The Battle of Lade and the Fall of Miletus

By 494 BC, the Persians were preparing for a large-scale offensive. Their goal was to conquer the city of Miletus, the center of the revolt. They collected a large army and navy according to ancient standards.

The rebels, seeing the preparation of the Persians, gathered a council. It was decided not to go against the Persians on the ground, making Miletus defend itself. Greek cities agreed to equip the allied fleet to protect the city from the sea. Upon arrival at Miletus, the Persian commanders decided that first, they needed to break the Greek fleet. Otherwise, the siege would be ineffective. They managed to bring discord among the Greeks. In the naval battle of Lada, due to treasonous activities, the Greeks were defeated. This defeat predetermined the fate of Miletus. After the siege, the city was stormed, the men were killed, and women and children were enslaved.

After the fall of Miletus, the uprising ended. After the winter, Persians consistently captured all the cities that had rebelled.  Although the Ionian revolt was completely suppressed, it is considered the beginning of the Greco-Persian wars. Darius wished to retaliate against the Greeks who took part in the uprising. The Ionian cities got rid of Persian domination after the battle of Mycale in 479 BC.