The History of the Mali Empire

The history of Mali starts in 1050, when the Almoravids attacked the Ghanan Empire, when Baramendana is recorded as ruler of a small Mali Kingdom. He was a Muslim and made a pilgrimage to Mecca, something that every ruler of Mali was required to do. After the death of Abu Bekr in 1087, several kingdoms gained independence from Ghana, including the Mali Kingdom. Not much is known about the rulers after this, until c. 1200, when the Susu kingdom under the rule of Sumanguru attacked the Mali Kingdom and killed all the heirs to the throne, except a young crippled child by the name of Sundiata, who was exiled. However, Sundiata managed to recover and raised an army. In 1235, he defeated Sumanguru at the Battle of Kirina and took back the throne. But he did not stop there. He defeated his uncle and sacked the Sangaran Kingdom, conquered Labe and went eastwards, crossing the Niger, subduing everyone on his path. In 1240, Sundiata destroyed the old city of Ghana; however, he let the chief of the city call himself king of Ghana, making him the only one who was allowed to call himself king. Later, his empire extended from the Atlantic to Kano, Katsina and Zaria in the east, to the dense forests of the south and the Sahara Desert to the north. Sundiata moved his capital from Djeriba to Niani on the Upper Niger. The city of Niani no longer exists, however there is a small village in that area that has the same name.

From Sundiata to Mansa Musa

In 1255, Sundiata died, and his throne was assumed by his son Mansa Ule. Under his rule Bamkuk, Konkodugu and Gangaran were added to the Mali Empire. After him, the Mali rulers were weak, making the situation inside the empire so bad that in 1285 a freed slave by the name Sakuru proclaimed himself an emperor. He was an ambitious and successful ruler who led several military campaigns. He conquered Tucolors and Songhai of Gao. Under his rule, trade flourished. Merchants all over Africa and the Middle East came to trade. He also made the traditional pilgrimage visit to Mecca. On his way back in 1300, he was assassinated on the coast of Tadjurah, on the Somaliland seaboard. The next three successors, Gau, Mamadu and Abu Bekr II, made little historical impact on the kingdom and ruled for only seven years. 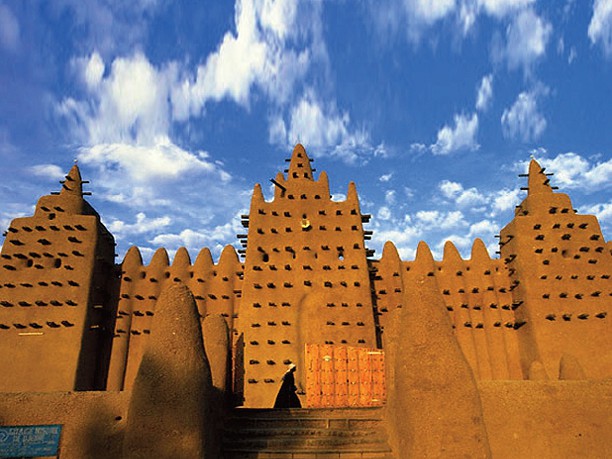 Mansa Musa and Decline of the Empire

In 1307, Mansa Musa came to the throne. He became a legend in Europe, Africa and Asia. It’s under his rule that the Mali empire became known to the rest of the world. He was the son of Abu Bekr II, who was the son of a sister of Sundiata’s, making Mansa Musa the great-grandson of Sundiata. In 1324, he decided to pilgrimage Mecca. He brought with him a caravan of 60,000 men and so much gold, that it depressed the regional market in Mecca for 10 years. As he was returning, news reached him that the city of Gao had been captured. Instead of returning directly home, he decided to visit the city, and after that went to Timbuktu. Timbuktu developed as a commercial city and cultural center. The foundation of the University of Sankore occurred under the rule of Mansa Musa.

The Mali Empire reached its culmination under Mansa Musa, and after his death c. 1332, it began its’ decline, but it still remained a regional power. It was often called upon for military assistance, for example by El Mamer, the King of Morocco. However, the strife between the chiefs took its toll. In 1400, Gao rebelled, and in 1431, the Tuareg seized Walata and Timbuktu, and eventually the empire broke up into small chiefdoms.