Nicholas Mystikos, patriarch of the Eastern Church from 901 to 907, and from 912 to 925, in one of the letters addressed to Simeon he writes: “… because you were born from your holy father in time of peace.” He refers to the peace treaty between Bulgaria and Byzantine, which means Simeon is born in 863/864. Not much is known about his childhood. His father wanted to make Simeon a high-ranked cleric in the Bulgaria, so he sent him to school in Constantinople. He learned the Greek language and was raised in a Byzantine spirit. It is not exactly known when he returned to Bulgaria, but it is estimated that it was before 886. After his father Boris retreated to a monastery and ended his political life, he was succeeded by Vladimir, his firstborn son. Vladimir tried to bring back paganism, so Boris had to reenter politics, imprison Vladimir and appoint Simeon as the new ruler in 893.

Soon after he became ruler, problems broke out with Byzantine. The Byzantine Emperor Leo VI the Wise moved the marketplace for Bulgarian goods from Constantinople to Thessaloniki, where the merchants paid higher taxes. Simeon complained about this to Leo, but he ignored him. Simeon was forced to take action and in 894 invaded the northern Byzantine territories, which started the Trade War. Byzantine troops were defeated somewhere in the theme of Macedonia, and after that, Simeon defeated and stopped the Magyar invasion on the north. The Magyar invasion was a product of the Byzantine diplomatic skills. Byzantine at this period was in war with the Arabs, so it could not send an effective number of troops against Simeon. In 895 Nikephoros Phokas was called back from south Italy to fight the Bulgarians. However, the two armies didn’t engage in a fight. The war ended with peace, which was in favor of Simeon. Byzantine was obligated to pay Bulgaria an annual tribute.

However, Simeon often violated the treaty. In 904 after Thessaloniki was looted by the Arabs, he seized the city. Leo VI was forced to make more territorial concessions to the Bulgarians in return for Thessaloniki. With the treaty of 904 all land that was inhabited by Slavs in modern southern Macedonia and Albania became part of Bulgaria. 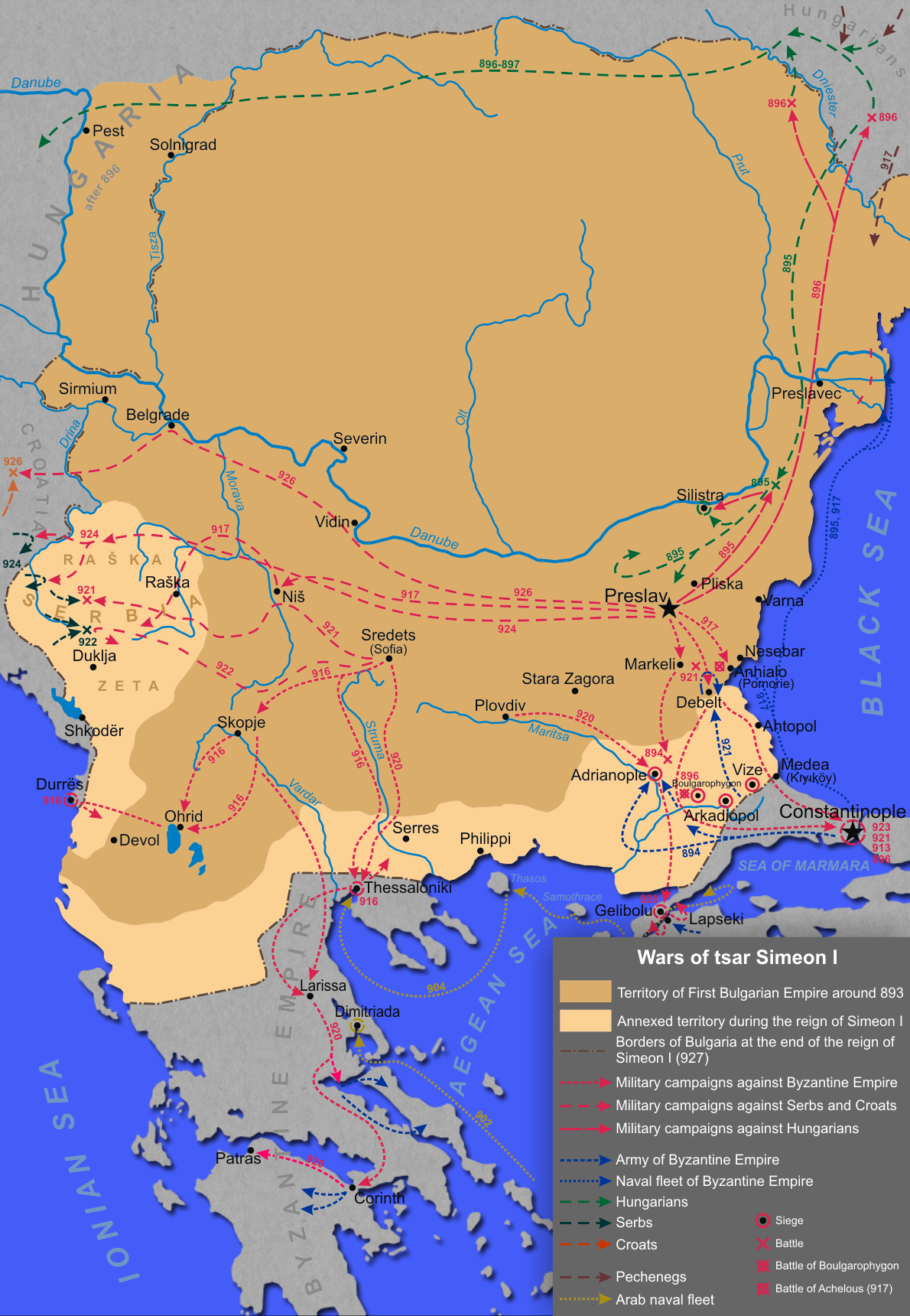 After the death of Leo VI in 912, problems broke out in Byzantine. Leo’s brother Alexander expelled Zoe or Leo’s wife from the palace, and sent away Simeon’s envoys who came to Constantinople to renew the peace from 896 and refused to pay the annual tribute. This provoked another war, but Alexander died in 913. This time the regency was taken by the patriac Nicholas Mystikos, He tried to change Simeon’s mind to not attack Byzantine in series of latter, nevertheless, Simeon invaded Byzantine and without any serious resistance reached Constantinople. Peace negotiations started. Byzantine was forced to pay annual tribute to Bulgaria, the future Constantine VII would have to marry one of Simeon’s daughters, and Simeon was officially recognized as a Tsar of the Bulgarians. But this peace didn’t last long. In 914 Zoe returned to the palace, removed all other regents and disowned the recognition of Simeon as a tsar. She also rejected the marriage with one of his daughters. Simeon as a response to this captured Adrianople, but later he gave it back.

In 917 Byzantine send a large army in Bulgaria, accompanied by the navy led by Romanos Lekapenos Phokas, son of Nikephoros Phokas and leader of the army, which stopped to rest near the river of Acheloos. Simeon here attacked the Byzantine’s army, which was disorganized. The Byzantines suffered terrible defeat and a lot of generals were killed, although Phokas managed to escape.

The Serbs were supposed to attack Bulgaria as allies of the Byzantine, but changed their mind because Michael of Zahumlje notified Simeon of this plan. After the victory over the Byzantine, Simeon sent an army to Serbia in order to punish the Serbian ruler Petar Gojnikovic. Petar became captive and was send to Bulgaria, where he died in a dungeon. Simeon put Pavle Branovic to the throne in Serbia, restoring the Bulgarian influence.

Meanwhile in Byzantine Romanos Lekapenos replaced Zoe as a regent, and married his daughter Helena Lekapones to Constantine VII, becoming a co-emperor in 920. This spoiled all of Simeon’s plans. No longer able to claim the Byzantine throne by diplomacy, Simeon started a war. In 921 he showed at the gates of Constantinople, and once more in 922. In 924 he even sent envoys to the Fatimid caliph. The caliph agreed, but Byzantine managed to capture the envoys. The same year a truce was arranged. Byzantine still had to pay an annual tax to Bulgaria.

War with Croatia and death

In 925, Simeon raised the status of the Bulgarian Orthodox church to a patriarchate. A year later in 926 he attacked Croatia, which at that time was a Byzantine ally. The Croatian King Tomislav crushed the Bulgarian army in the Battle of Bosnian Highlands. Latter Tomislav accepted a status quo with the Bulgarians and abandoned the alliance with Byzantine.

In 927 Simeon died. It is said that the defeat from Tomislav had a big impact on Simeon, and might have been the reason why Simeon fell ill and later died of a heart failure. He was succeeded by his son Peter I.