The Discovery of America

The discovery of America is an event as a result of which for the inhabitants of the Old World (Europe) a new part of the world became known – America, consisting of two continents.

Christopher Columbus made four expeditions to the New World, which equipped the Spanish Catholic kings in the hope of opening a shorter western route to trade with India.

The first expedition of Christopher Columbus (1492–1493) consisting of 91 people aboard the ships “ Santa Maria ”, “ Pinta ”, “ Nina ” left the Polos de la Frontera on August 3, 1492, turned from the Canary Islands West (September 9) crossed the Atlantic Ocean in the subtropical zone and reached the island of San Salvador in the Bahamas archipelago, where Christopher Columbus landed on October 12, 1492 (the official discovery of America). October 14-24, Christopher Columbus visited a number of other Bahamas, and on October 28-December 5, he discovered and explored a portion of the northeast coast of Cuba. December 6, Columbus reached Haiti and moved along the north shore. On the night of December 25, the flagship “Santa Maria” sat on the reef, but people escaped. Columbus aboard the ship “Nina” on January 4-16, 1493 completed the survey of the northern coast of Haiti and returned to Castile on March 15.

The 2nd Expedition (1493–1496), which Christopher Columbus headed already in the rank of admiral and vice-king of the newly discovered lands, consisted of 17 vessels with a crew of over 1.5 thousand people. On November 3, 1493, Columbus discovered the islands of Dominic and Guadeloupe, turning to the North-West – about 20 more Minor Antilles, including Antigua and the Virgin Islands, and on November 19th – the island of Puerto Rico and approached the northern coast of Haiti. March 12-29, 1494 Columbus, in search of gold, made an aggressive campaign into Haiti, and crossed the Cordillera-Central ridge. From April 29 to May 3, Columbus with 3 ships passed along the southeastern coast of Cuba, turned from Cape Cruz to the South and on May 5 reached Jamaica. Returning to Cape Cruz on May 15, Columbus walked along the southern coast of Cuba to 84 ° west longitude, found the Jardines de la Reina archipelago, the Zapata peninsula and the island of Pinos. On June 24, Christopher Columbus turned east and surveyed August 19-September 15 the entire southern coast of Haiti. In 1495, Christopher Columbus continued the conquest of Haiti; March 10, 1496 left the island and on June 11 he returned to Castile. 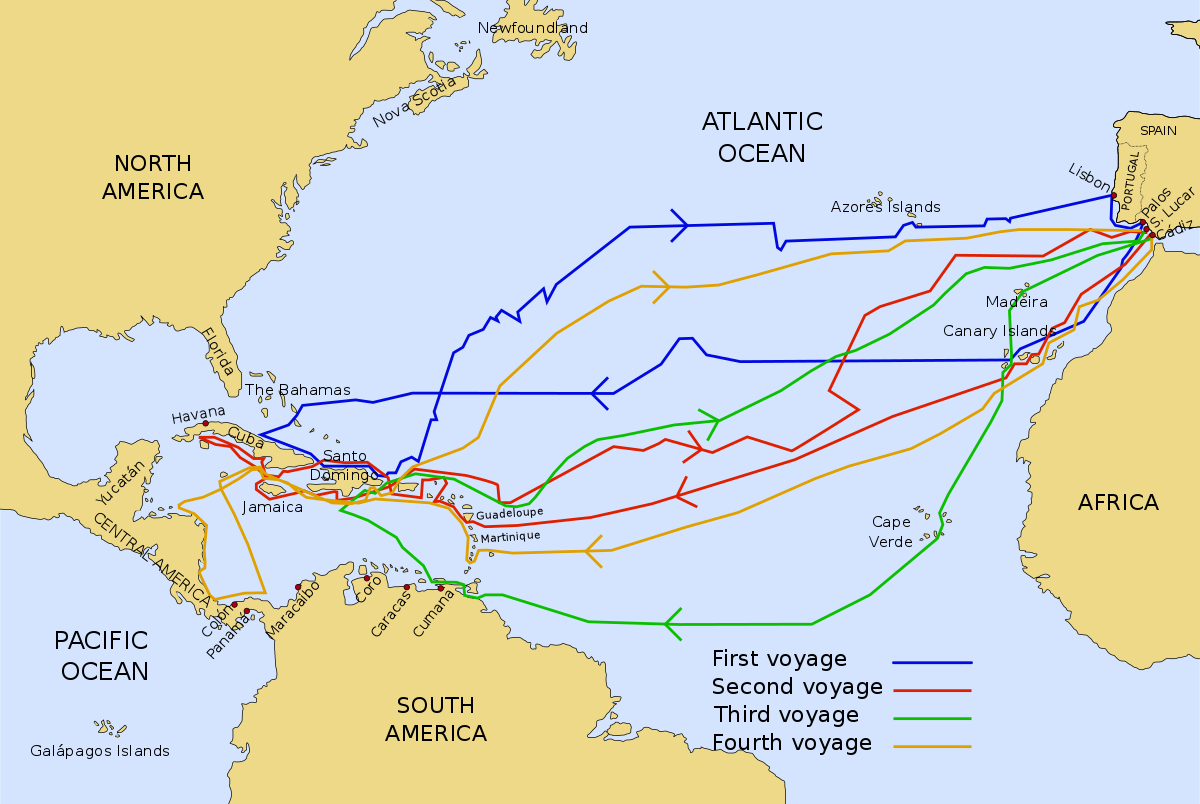 Expedition 4 (1502-1504). Having obtained permission to continue the search for the western route to India, Columbus, with 4 ships, reached Martinique on June 15, 1502, on July 30, Honduran Bay and opened the Caribbean shores of Honduras, Nicaragua, Costa Rica, and Panama from August 1, 1502 to May 1, to Urab. Turning then to the North, June 25, 1503 crashed near the island of Jamaica; help from Santo Domingo came only a year later. Christopher Columbus returned to Castile on November 7, 1504.

The European pioneers of America can be considered:

The first people who settled in America are Native Indians who crossed there about 30 thousand years ago from Asia along the Bering Land.

In the 10th century, around 1000, the Vikings led by Leif Eriksson. L’Ans-o-Meadows has remnants of a Viking settlement on the continent.

In 1492 – Christopher Columbus ( Genoese in the service of Spain ); Columbus himself believed that he had opened the way to Asia (hence the names West Indies, Indians )

In 1507, the cartographer M. Waldzemüller proposed that the open lands be called America in honor of New World researcher Amerigo Vespucci – this is considered the moment from which America was recognized as an independent continent.

There are reasonable grounds to believe that the continent was named after the English patron of arts Richard Amerike from Bristol, who financed the second transatlantic expedition of John Cabot in 1497, and Vespucci took for himself the nickname of the continent already called. In May 1497, Cabot reached the shores of Labrador, becoming the first officially registered European to set foot on the North American continent. Cabot made a map of the coast of North America – from Nova Scotia to Newfoundland. In the Bristol calendar for that year we read: “… on the day of St.. John the Baptist [June 24] found the land of America by merchants from Bristol, who arrived on a ship from Bristol with the name “Matthew” (“metik”) “.

In addition, hypotheses were made about visiting America and contact with its civilization by navigators to Columbus, representing various civilizations of the Old World. Here are just some of these hypothetical contacts:

in 371 BC er – Phoenicians
in the 5th century – Hui Shen (a Taiwanese Buddhist monk who traveled to the country of Fusan in the 5th century, identified by different versions with Japan or America)
in the 6th century – holy Brendan (Irish monk)
in the XII century – Madog ap Owain Gwynedd (Welsh prince, according to legend, visited America in 1170)
there are versions according to which at least from the thirteenth century America was known to the Knights Templar
in 1331 – Abubakar II (Sultan of Mali )
OK. 1398 – Henry Sinclair (de Saint-Clair), Count of Orkney (ca. 1345 – ca. 1400)
in 1421 – Zheng He (Chinese researcher)
in 1472 – João Corterial (Portuguese)