Hugh(called Capet, for the cloak he wore as abbot of St. Martin de Tours). At Hugh’s accession, the kingship was at its nadir; such power as Hugh had was feudal; the royal title meant little more than hegemony over a feudal patchwork, an ill-defined area called France, and the prestige of ancient monarchical tradition sanctified by ecclesiastical consecration. Hugh’s own feudal domain consisted of the Île de France (extending from Laon to Orleans, with its center at Paris) and a few scattered holdings. The great barons of the so-called royal fiefs recognized Hugh as their suzerain, but never did homage nor rendered service. Hugh’s special interest was to maintain his control over his chief resources, the archbishopric of Reims and the great bishoprics (Sens, Tours, Bourges) and abbeys of the Île de France, and to wean northeastern France away from the Carolingian and imperial interest. Despite clerical pressure, he avoided submission to imperial suzerainty, a policy that facilitated the demarcation between France and Germany. In defiance of pope and emperor, he forced his own candidate into the archbishopric of Reims. Hugh crowned his son shortly after his own coronation and began a practice (cooptation) that the early Capetians continued (until Philip II no longer felt it necessary), thus ensuring the succession and weakening the principle (dear to the feudality) of elective kingship. 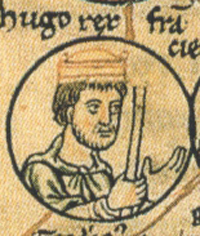 ROBERT II (the Pious), an active, well-educated, polished, amiable ruler, a good soldier, supported by the duke of Normandy in constant wars against his neighbors, and by the monasteries of Burgundy in attacks on the dukes of Burgundy. The duchy of Burgundy escheated to the crown and was given to Robert, a younger son. Robert the Pious, like his father, supported the Cluniac reformers. Minor territorial additions signify the revival of royal power

HENRY I OF FRANCE

HENRY I, an active, brave, indefatigable ruler whose reign nevertheless marked the lowest ebb of the Capetian fortunes. The rebellion of his brother Robert, supported by Eudes, count of Chartres and Troyes, was put down with the aid of the duke of Normandy, and Robert was pacified by the grant of the duchy of Burgundy (which continued in his family until 1361). Henry supported the duke of Normandy (1047), but led a coalition against him two years later and was defeated. The prévôts were introduced to administer justice and taxation in the royal lands. The kingdom of Burgundy passed (1032) to the empire.

Rise and expansion of Normandy

William I became duke (1035) and until 1047 faced a series of baronial revolts. With the aid of his feudal suzerain, King Henry of France, William defeated his revolting barons (1047) and razed their castles. The union of Normandy and Maine was completed (1063) against powerful opposition from the counts of Anjou. William’s alliance with Henry was broken (1053), and Henry ravaged the heart of Normandy (1058). Normandy was becoming a developed feudal state under firm ducal control: military service, assessed in knights’ fees, was attached to specific pieces of land; no castles could be built or maintained without ducal license; private warfare and blood feud were strictly limited. Coinage was a ducal monopoly. The legal jurisdiction of the duke was wide, local government was under the duke’s representatives (the vicomtes), who commanded the local forces, guarded the castles, did justice, collected the revenue (a large part of which was cash). The Church had been revivified with the duke supreme, naming bishops, most of the abbots, and sitting in provincial
synods.

Norman relations with England had grown closer, and this tendency culminated (1002) in the marriage of Duke Robert’s sister Emma with King Ethelred. The son of this marriage, Edward the Confessor, educated largely at the Norman court, came to the throne of England (1042) and died without heirs (1066). The witan at once elected Harold, Earl Godwin’s son. William I of Normandy, with a volunteer force (perhaps 5,000–6,000) collected from Normandy and the Continent, defeated Harold in the Battle of Hastings (Oct. 14) and was crowned king of England on Christmas Day. The Bayeux Tapestry (actually a long 230-foot-by-20-inch strip of embroidery), made in the south of England before 1082, gives a narrative in picture and text of events surrounding the Norman Conquest; it is a primary historical source for the period.