“In the reign of the good Christian Tsar Peter (927-969) there was a priest called Bogomil (meaning ‘worthy of God’s compassion’, ‘beloved of God’, ‘worthy of God’s mercy’), but in reality, Bogonemil (meaning ‘unworthy of God’s compassion’), who preached heresy in the country of Bulgaria”. This was written by Cosmas the Presbyter in his 10th century Discourse. He is talking about the beginning of one of the most influential and elusive of all medieval heretics, the Bogomilism. The themes and principles of the teachings of the priest Bogomil, mark a clear break from the great heresies of the ancient world. The emergence of Bogomilism was the result of a complex mix of religious and social developments. The Bulgarian King Boris (852-889) negotiated with both the Pope in Rome, and the Byzantine Emperor. Western missionaries were sent into the Balkans, who preached Latin Christianity. The Byzantine Emperor and the Byzantine church recognized the threat of western interference in Bulgaria, so eventually they convinced Boris to convert to Orthodox Christianity. The wars between Byzantines and Boris’ successors only made things worse, and the rise of monasticism with a new style of monastic life, which to many was not welcome, and the boyars’ rejection of Christianity complicated things even further.

The first mention of this heresy is in a letter from Patriarch Theophylact Lecapenus between 940 and 950, though he does not mention it by the name Bogomilism. He described it as a mixture of Manichaenism and Paulianisam. Cosmos identifies the founder as pop Bogomil. The title “pop” was used for ordinary village priests, so it is likely that Bogomil was a simple priest. Cosmos tells that Bogomil rejected marriage, lived a celibate life, and it is probable that he lived simply, in according with the teachings of the Gospels. Bogomil must have been a successful preacher, judging by the growth of the movement. He attracted a substantial following, especially among the peasantry. Bogomil’s dualist faith; a doctrine that includes two gods, one good and one evil. Bogomilism considered the material world as a place of evil, refusing the physical pleasures and the material aspects of cults in the Orthodox Church, the water in baptism and the bread and wine of the Eucharist. They claim the devil as creator of humans, the sky, sun, stars, air, churches, cross, etc. The devil was given the name Mammon, that corresponds with the biblical passage, “One cannot serve God and Mammon”.

According to Cosmos, Bogomils beliefs were based on the scriptures; for example, the Gospel according to Matthew, where the devil says to Jesus, “All these things I will give you, if you will fall down to worship me” (4:9). They believed that the devil offered Jesus things in the world that he had created. They used John’s Gospel too, “Now the ruler of the world is coming, and has no power over me” (14:30), which they took to mean that the devil was the lord and creator of the world. Bogomils didn’t honor the saints and denied that miracles were performed by them through the power of the Holy Spirit. In accordance with the belief that the devil rules over the world and everything in it, they believed that the miracles were performed by the devil to trick mankind. They also followed a strict code where they didn’t honor any holy icons and condemned those functions of man that brought him into close contact with matter, especially marriage, the eating of meat, and the drinking of wine. 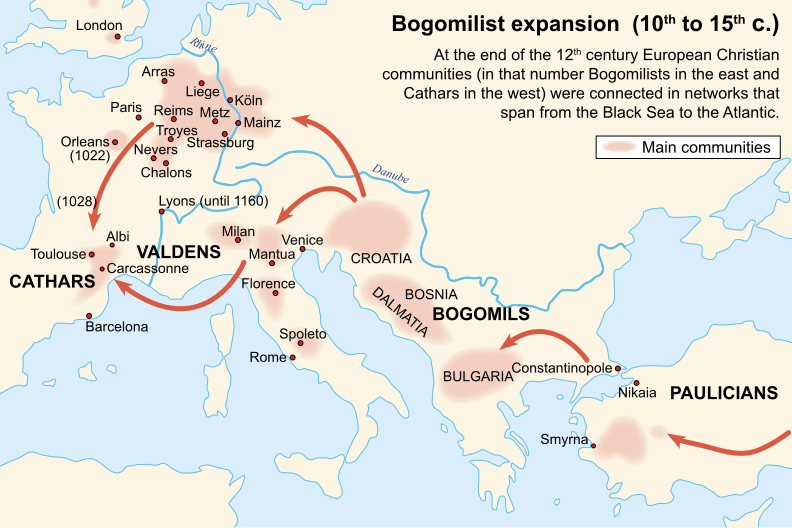 During the 11th and 12th century, Bogomilism spread over many European and Asian provinces of the Byzantine Empire. The growth of Bogomilism resulted in trial and imprisonment of prominent members from this sect in Constantinople and public burning of their leader, Basil. In the second half of 12th century, this sect spread westward. The Serbian ruler Stefan Nemanja was obliged to summon a general assembly of his subordinates to find a solution to deal with the heresy. Roman Catholic authorities reported the Bogomil heresy in Dalmatia and Bosnia. By the early 13th century, the dualistic communities of southern Europe, consisting of  Paulicians and Bogomils in the east and the Cathari in the west, formed a network stretching from the Black Sea to the Atlantic. Once the Ottoman had conquered most of southeastern Europe in the 15th century, obscurity descended upon the sect. Traces of a dualistic tradition in the folklore of southern Slavs are all that remain today. The village of Bogomila, the river and mountain Babuna in Macedonia (Bogomils are also mentioned by the name of Babuni in some sources) and many others, are a reminder of the most powerful sectarian movement in the history of the Balkans.