Lydia was an ancient kingdom in Asia Minor 1200 BC – 546 BC. The royal capital of Lydia was Sardis. The whole country had fertile fields, especially Sardis. The land was rich in horses, gave good wine, saffron, zinc and other metals, especially gold that made the country very rich.

The inhabitants of Lydia, who had reached a certain degree of culture early on, belonged to an indefinite race, strongly influenced by the Hittites; One of the royal dynasties of Lydia belonged, as it is supposed, to the tribe of the Hittites. The language of the population was Lydian, to the Anatolian group of Indo-European languages. Writing – the Lydian alphabet, was outwardly reminiscent of Greek.

The history of the Lydian state had reached us in a semi-legendary reflection of the ancient literary tradition and fragmentary information of the Eastern, primarily Assyrian texts. But the prospects for the scientific reconstruction of the Lydian history are mainly connected with the progress of archaeological excavations, which are most systematically and effectively conducted from 1958 to the present day on the site of the capital of the Lydian kingdom in the city of Sardis.The central region of the country was named after the capital.

In its political structure, Lydia was a monarchy. At the head of the state was the king. The support of his power was formed by a detachment of bodyguards and an army; the main role was played by the famous cavalry and Lydian chariots. Lydia’s kings also attracted mercenaries, most often neighbors: Carians, Ionians and Lycians. A great role in the royal court was played by the so-called co-rulers, who came from prominent aristocratic families. Perhaps there was also an aristocratic council. To address important issues of foreign and domestic policy, a national assembly was convened. However, gradually, with the growth of the power of the kings power, it lost its significance. In the social and political life of Lydia archaic and old social relations have survived: division according to tribal trait, the customs of ancestors, ancient generic norms of law.

The heyday of the Lydian kingdom falls on the 7th-6th centuries. BC, when the dynasty of the Mermnads came to power, founded by Giges (the first half of the 7th century BC). He came from a noble, but not royal family and seized power as a result of the palace coup. Giges was one of the most powerful Lydian kings. He annexed part of Phrygia and Caria, Troas and Misia to Lydia, thanks to which the Lydians gained access to the most important sea straits and trade routes in the Black Sea region.

With Ionia started a war lasting a century and a half; Lydians burned gardens, destroyed cities, robbed temples. The Ionian culture penetrated the Mermanad court and gradually smoothed out the traces of the preceding influences – Hittite and Assyrian. 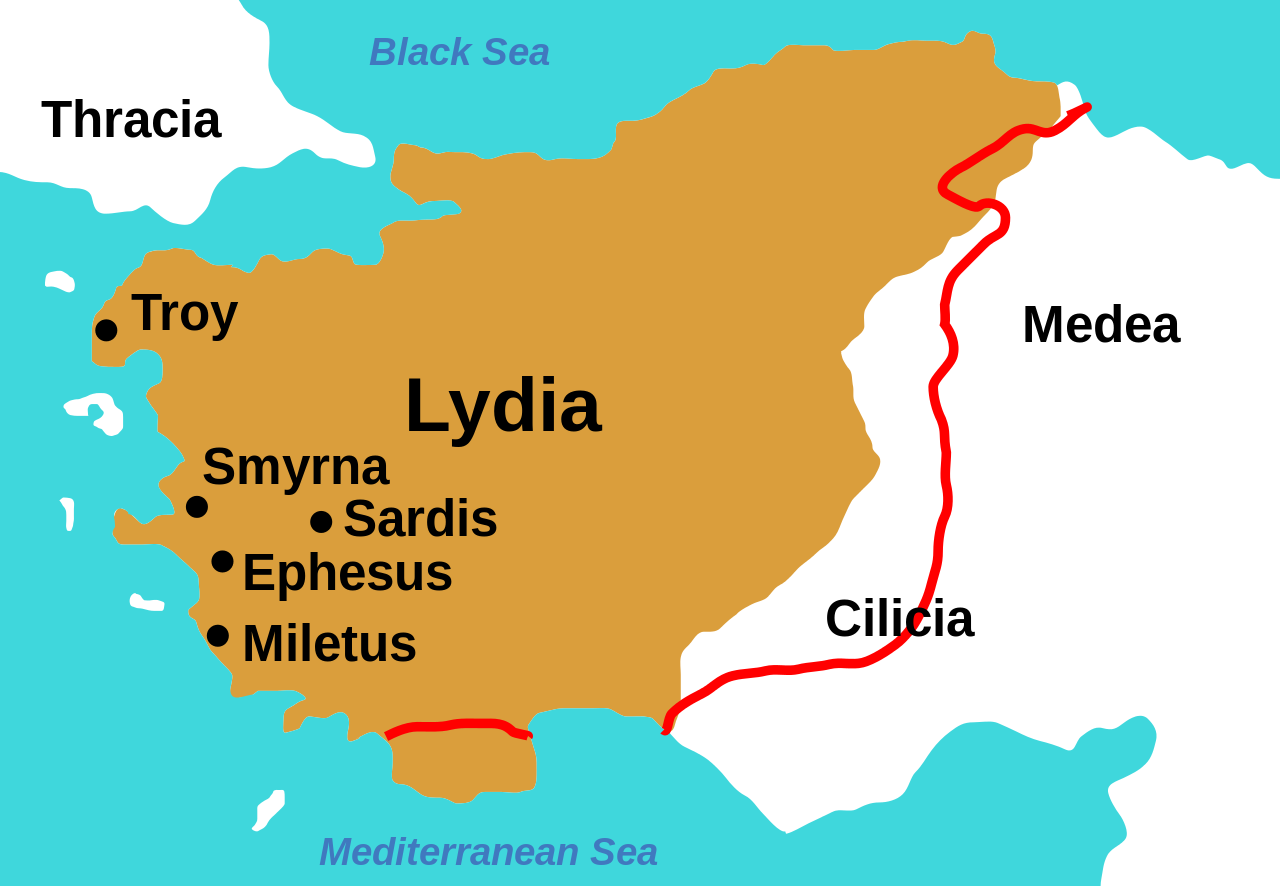 The invasion of the Cimmerians forced Giges to turn to the assistance of the king of Assyria, Ashurbanipal; he helped him, but made him pay tribute. When Giges stopped paying this tribute and even sent the Carian and Ionian mercenaries to the indignant Psammetich I, the Cimmerians again invaded Lydia. During this invasion, Giguet was killed, Lydia was devastated and Sardis taken, except for the inner fortress (650 BC).

Ardis II, the son of Giges, returned most of the lost territory and expanded his holdings at the expense of Greek settlements. After starting the war with Miletus, he cut off one other city of the Ionian Union, taking the fortified acropolis of Priena.

Sadiatt, the next king (630-618 BC), twice defeated the infantry of the city of Miletus in the Meandra valley. Aliat (617-560 BC), desperate to take Miletus by storm, decided to force the city to surrender through hunger, but without success. He made peace with Miletus and, having directed his forces to other less fortified cities, took Smyrna. Hardly had he managed to establish his supreme authority to the left bank of Galis, as he encountered the Kiaksar Median. The struggle lasted 6 years, with varying success. The war between Lydia and the Midian ended in peace, the conclusion of which was influenced by the solar eclipse on May 28, 585 BC, recognized as a bad omen. The border between the feuding states was recognized as the Galis River. The treaty was cemented by a dynastic marriage: the Median prince Astyages married a Lydian princess.

A major success of Lydia’s foreign policy during this period was the expulsion from the Lesser Asia of the warlike tribes of the Cimmerians. After this war, Aliatta managed to achieve influence on Ephesus; The last years of his reign he used to build a giant tomb.

The foreign political flourish of Lydia falls on the time of Creus’s reign (562-547 BC). He conquered Greek cities in Asia Minor, forcing them to pay Lydia tribute. But in 546 BC The Lydian kingdom was destroyed by the Persian king Cyrus and since then was under the domination of the Persians, Macedonians, Syrians and Romans.

Lydian culture is a complex and diverse phenomenon. The Lydians borrowed their alphabetic writing from the Greeks of Asia Minor. Lydians were popular for their gymnastic military games and military dances, various games of dice, cubes. There was a high musical culture. In Lydia, medicine was very developed.

The Lydians built impregnable fortresses, monumental royal tombs, built complex artificial reservoirs. In the Lydian religion, the cults of dying and resurrecting deities, and the orgiastic mysteries in their honor were widely used. Lydian culture had an impact on the Greek, and also gave Greece a number of cultural achievements of the East.

Lydia was the birthplace of the coin – the most convenient means of circulation in trade. In the VII century BC under King Gigese, a coin made of a natural alloy of gold and silver, was then minted. The Lydian monetary system was widely used.

About Fredrick I of Prussia He was born in Konigsberg as a third son, this dynasty had a wast reach, he had a first cousin...
Read more
Medieval History

Why do we Idolize Violent Invaders From the Past Such as the Vikings and are Shocked by ISIS?

The Question Okay so one of our readers popped up this question? So we looked at it and seemed like a pretty cool article headline. So...
Read more
Medieval History

The History of Viking Ships and Their Sailing Methods

Ships were an important part of Viking society, not only as a means of transportation but also for the prestige that it conferred on her owner and skipper.
Read more
Ancient History

Would the Fourth Crusade Have Been Successful if it Had Happened in Egypt, as Originally Planned?

Crusades The crusades gave away a good Casus Belli and successfully worked for a period of time. Many kingdoms and especially the pope profited...
Read more
Rome

A Bone Chilling Animation Of The Final Day Of Pompeii

Pompeii along with other nearby villages and villas were in the surrounding area that was mostly destroyed and buried under 5-7 meters of volcanic ash, which was caused by the eruption of Mount Vesuvius in the year 79 CE.
Read more
Load more