Serbian Campaign of World War I

The Serbian campaign was an important front in the First World War, which lasted from July 28, 1914, when Austria-Hungary invaded Serbia, until the end of the war on November 3, 1918. The front stretched from the Danube to southern Macedonia. Almost all countries in the region were drawn into the war. The Kingdom of Serbia lost 1.2 million inhabitants during the war, 33% of its population.

The First World War began on July 28, 1914, when Austria-Hungary declared war on Serbia. In both countries, mass mobilization of troops began, and on August 12, fighting began when the Austrian army crossed the border into Serbia. The Austrians, because of the split into two fronts, the eastern with Russia and the southern with Serbia, committed relatively small forcesagainst Serbia at the beginning of the war. The total number of Austrians was 200,000, the Serbian forces were slightly larger, but they were poorly armed.

Austria-Hungary had the third largest population in Europe, almost twelve times larger than the population of Serbia. And the Russian Empire, not only in war with Austria-Hungary, but also with the German Empire and Turkey, could not throw all its forces into the defense of Serbia.

More than once, the Austrians tried to break through the Serbian defenses, but they could not. Serbia conducted a retaliatory offensive operation in southern Bosnia in September 1914, but the Serb forces were very small and by the end of the month the Serbs were completely ousted from the Austro-Hungarian borders.

The Battle of Kolubara

Vojvoda Misic correctly observed that the Austrian forces were weakened, and on December 3 launched a full counter-attack of the Serbian army. The battle lasted for three days, until the Austrian general Potiorek pulled back, beyond the river, to Austrian territory. The Serbian Army returned Belgrade on 15 December. The first stage of the war against Serbia ended without a change in the borders, but the losses on both sides were significant. The Austrian army lost 227,000. Serbian losses amounted to 170,000.

In connection with the deteriorating military situation of the Ottoman Empire, at the beginning of 1915 the chief of the German General Staff persuaded the chief of the general staff of the Austro-Hungarian troops, of the necessity of conquering Serbia in order to have a railway connection with the Turkish capital of Constantinople. To achieve this goal, it was necessary to involve Bulgaria. In September 1915, Bulgaria decided to enter the war on the side of Germany. On September 23, general mobilization began in Bulgaria.

On October 9, Manckensen took Belgrade. On November 10, units of the 11th Army took Nis and joined forces with the First Bulgarian Army. As a result of the operation, by the beginning of December the entire territory of Serbia was occupied. The remnants of the Serbian army withdrew to Albania, from where they were evacuated by Allied ships to the island of Corfu. Subsequently, parts of the Serbian army fought on the Salonika Front.

The front was created to assist the Serbian army and jointly defend against the Austro-German-Bulgarian offensive on Serbia. The differences between the Entente countries and the desire to shift the main gravity of this operation to each other led to the fact that the assistance of the Allies was insufficient and belated. By the end of 1915, Serbia was occupied, and the Entente troops moved to the city of Thessaloniki. The allies were confronted by two Bulgarian armies, reinforced by German troops. 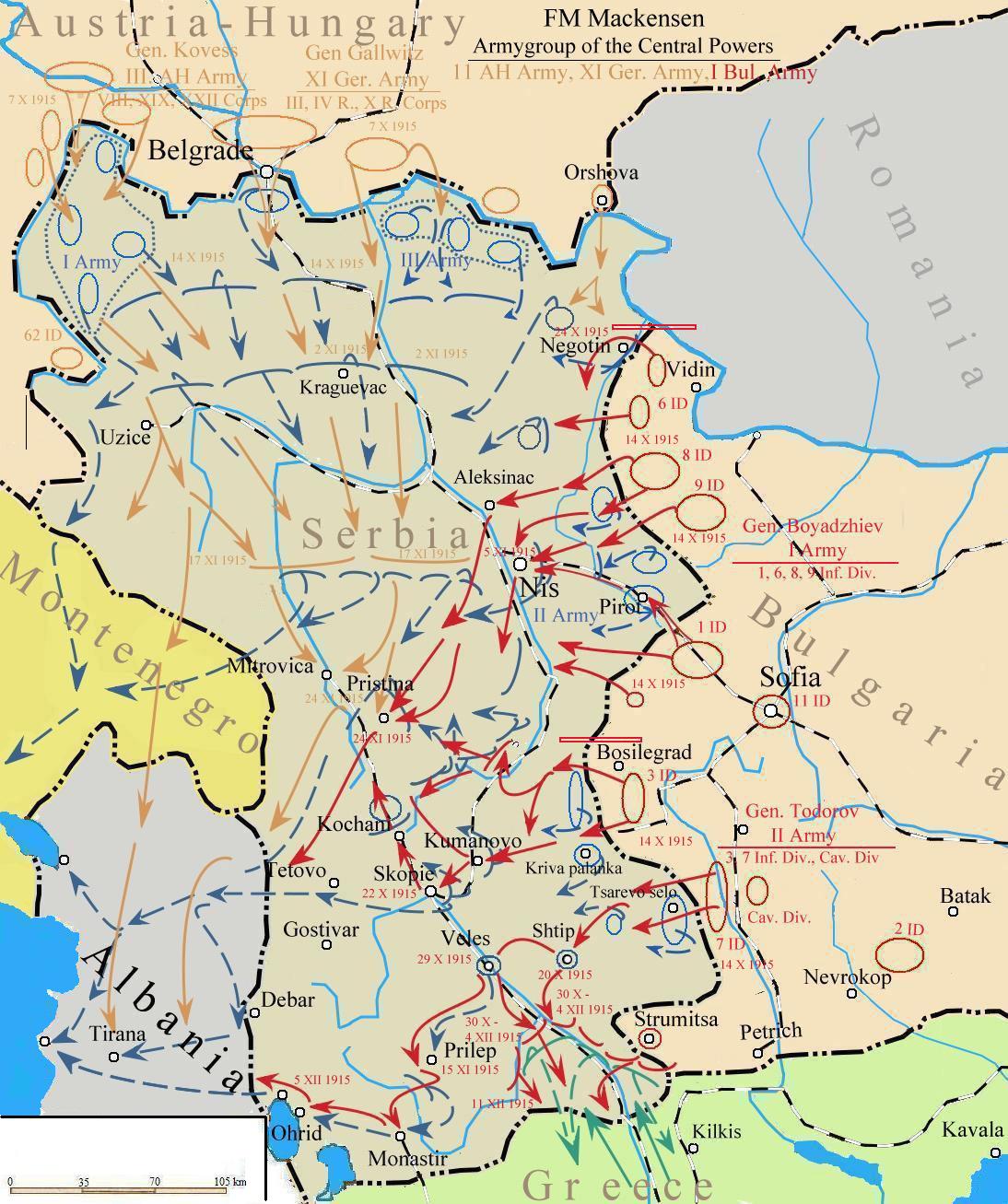 Under the terms of the treaty with Romania, which was to join the war on the side of the Entente, the Allies planned in August 1916, the offensive of Russian-Romanian troops south of the Danube, and the Salonika Army in the direction of the Vardar and Struma rivers. The offensive of the Bulgarian troops on August 17 significantly weakened the Salonika Army. Its offensive, begun on September 1, ended in November 1916 with the withdrawal of the Allied forces on the Gevgelia.

In the spring of 1917, the allied forces numbered 24 divisions: 6 French, 6 Serbian, 7 British, 3 Greek, 1 Italian and 2 Russian brigades. Minor tactical results were achieved by the Allies on the Salonika Front in the offensive in April 1917. A decisive turning point in the situation at the front was achieved as a result of the offensive of the Thessaloniki Army, begun on September 15, 1918. By the end of this operation, the Bulgarian troops and the 11th German army were defeated, and on September 29, Bulgaria capitulated. Allied forces interrupted communications between Germany and Bulgaria and were given the opportunity to strike a blow to the central powers’ flank, which was the beginning of the defeat of the Austro-German coalition.

In this war, the Serbs proved themselves to be excellent soldiers, fighting against superior numbers of  enemies with better arms. The great suffering of army and people, especially during the withdrawal through Albania, will have great consequences for the future generation.

Serbia, however, disappears as a state in 1918, and becomes Yugoslavia. Great suffering and sacrifice will not bear fruit, Serbia will disappear. This historic decision will be catastrophic in the future. The first world war will be the worst and brightest point in Serbian history.