Kongo Kingdom of Africa – The History of Kongo

The kingdom of the Kongo (Kongo dya Ntotila) flourished along the Congo River in the west-central coast of Africa from about the 14th century. The kingdom covered a large part of what is now the Democratic Republic of Congo, but the king (the manikongo) lived in what is now Angola.

The fifth king of the Kongo and contacts with the Portuguese

King Nimi, from near present-day Boma, conquered the Congo Plateau. He and his followers married into the local elite and he was accepted as ruler of the region. The wealth of Kongo was based on trade in ivory, hides, and slaves, and it also used a shell currency popular in western Africa. In 1482, King João II of Portugal sent an expedition, under the command of Diogo Cão, to explore the west coast of Africa, and they reached the Congo River in the following year. Diogo Cão sent a delegation to see the fifth king of the Kongo, Nzinga-a- Cuum (or Nzinga Nukuwu), who was living at Mbanza (São Salvador do Congo). Nzinga-a-Cuum asked Cão to take charge of a young relative, Caçuto, and others, and take them back to Lisbon to receive a Christian education. Caçuto learned Portuguese and much about Portuguese and European history, also converting to Christianity. At Bela in 1489, he was baptized and took the name João Silva, after King João II of Portugal, and Pire Silva, a court official who had served as his godfather. Caçuto then returned to Mbanza. 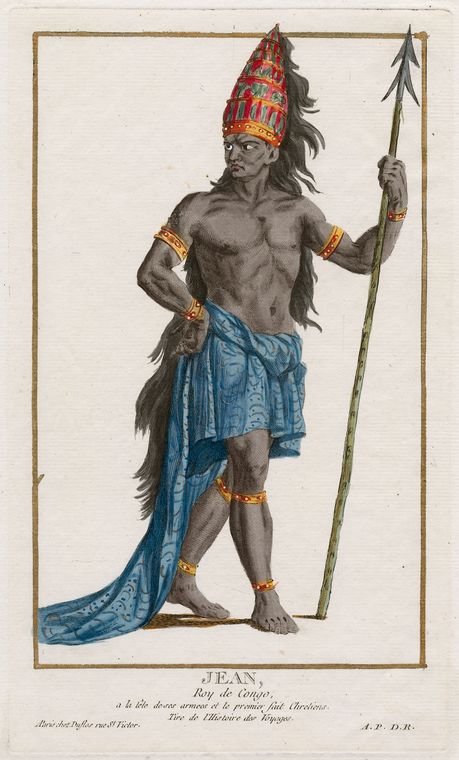 Christianity to the Congo, and European Education

Nzinga-a-Cuum had become wary of the Portuguese. Possibly worried about Portuguese military power, Nzinga-a-Cuum converted to Christianity, becoming King João I of the Kongo. However he had long practiced polygamy. After his baptism, he returned to his many wives and disowned his son, who, with his mother and other members of the family, sought the protection of the Portuguese. When his father died in 1506, Afonso returned to Mbanza, was crowned, and then set about converting his people to Catholicism. He regularly corresponded with King Manuel I of Portugal and sent over more of his subjects to Lisbon to receive a European education.

Succession Crisis and the beginning of the Slave Trade

When Afonso I of Kongo died in 1542, his son and successor Pedro I became the next king; he was succeeded briefly afterward by Francisco I (Mpudi a Nzinga Mvemba). Pedro became king again briefly. A nephew, Diogo, disputed these two rulers and staged a rebellion against Pedro and then Francisco and then Pedro again. He forced Pedro to seek sanctuary in a Catholic church, where he wrote and pleaded for help from King João III the Pious of Portugal and from the pope. Diogo came
to the throne at a time when some Portuguese traders were eager to expand the slave trade, and Diogo was eager to profit from this. When he died in 1561, his illegitimate son, Afonso II, succeeded him, and a violent succession crisis broke out.

Slave disputes, war with the Portuguese and eventual end of the Kongo monarchy

While he was attending Mass within months of becoming king, Afonso II was murdered by his
brother Bernardo. Bernardo I reigned for six years. His successor, Henrique I, was king for a year before being forced to flee when the neighboring kingdom of Jagas invaded Kongo. Henrique was succeeded by Alvaro I, who reigned for 19 years and brought some stability to the country. Alvaro I also stepped up the slave trade and sent as many as 14,000 slaves annually to Brazil. Finally Antonio I, who became king in 1661, quarreled with the Portuguese over control of the slave trade. In 1665, he gathered his supporters and met the Portuguese in battle at Mbwila. He was wounded in the fighting, captured, and subsequently beheaded. After 1678, after a violent internal civil war, the kingdom of Kongo rapidly fragmented into a number of warring states. The kings of Kongo—descended from Afonso I—did, however, continue to hold court and conduct ceremonial functions.
Henrique III, Afonso Nlengi, reigned from 1793 until 1802, and the male line continued until Pedro
VII, Afonso, died in 1962, whereupon Isabel María da Gama became the regent. Although some people wanted to restore the Kongo monarchy, when Angola gained its independence in 1975, the new government refused to recognize its existence.