Iberia and Al-Andalus at The End of The 15th Century

By the end of the 15th century, the Granada Emirate remained the only Muslim state of Al-Andalus (the Arabic name of Iberia). Other Muslim principalities ( taifs ) of the once powerful Cordoba caliphate were already conquered by Christians. At the same time, pessimism about the future of Granada was formed long before its fall. Nevertheless, Granada at that time was still rich and powerful, and the Christian states were divided and fought among themselves. The situation around Granada began to deteriorate after the death of Emir Yusuf III in 1417. Since then, Granada has been in an almost constant state of smoldering civil war. Generic ties among local Muslims were stronger than loyalty to the emir, which greatly hampered the consolidation of power. Often the only territory controlled by the emir was the city of Granada itself. From time to time, the emir did not even control the entire city, but occupied only the Alhambra Palace and Albaicin, the most important district of Granada.

The internal struggle had greatly weakened the state. The economy fell into decay when the previously world-famous porcelain of Granada got a competitor in the face of porcelain from Manises, near Valencia. Despite the weakening economy, the taxes were still pretty high, which was due to the need to maintain a large army. Ordinary residents of the city paid three times more taxes than the Castilians. The high taxes imposed by the emir Abul-Hassan Ali ( 1464 – 1485 ) greatly contributed to his unpopularity. At the same time, these taxes allowed the army to maintain its power, in particular, Hassan was successful in suppressing Christian uprisings in his lands.

The border between Granada and the Castilian lands in Andalusia was in constant motion. Cross border raids were common, as were mixed alliances between local noblemen on both sides of the border. Relations between Christians and Muslims were governed by random truces and demands for tribute from each side. The central governments of Castile and Granada preferred not to intervene.

King Enrique IV of Castile died in December 1474, which marked the beginning of the War of Castilian Succession between the daughter of Enrique Juana Beltraneja and the half-sister Enrique Isabella. The war raged from 1475 to 1479, opposing the supporters of Isabella and the Crown of Aragon to the supporters of Juana in the people of Portugal and France. During the war, the border with Granada remained virtually defenseless: the Castilians did not even bother to demand compensation for the 1477 Muslim raid. The truce was concluded in 1475, 1476, 1478 and 1479. The war for the Castilian inheritance ended with the victory of Isabella. Her wedding with Ferdinand of Aragon in 1469 meant the unification of two powerful kingdoms of Castile and Aragon, which was a direct threat to the existence of the Granada Emirate. 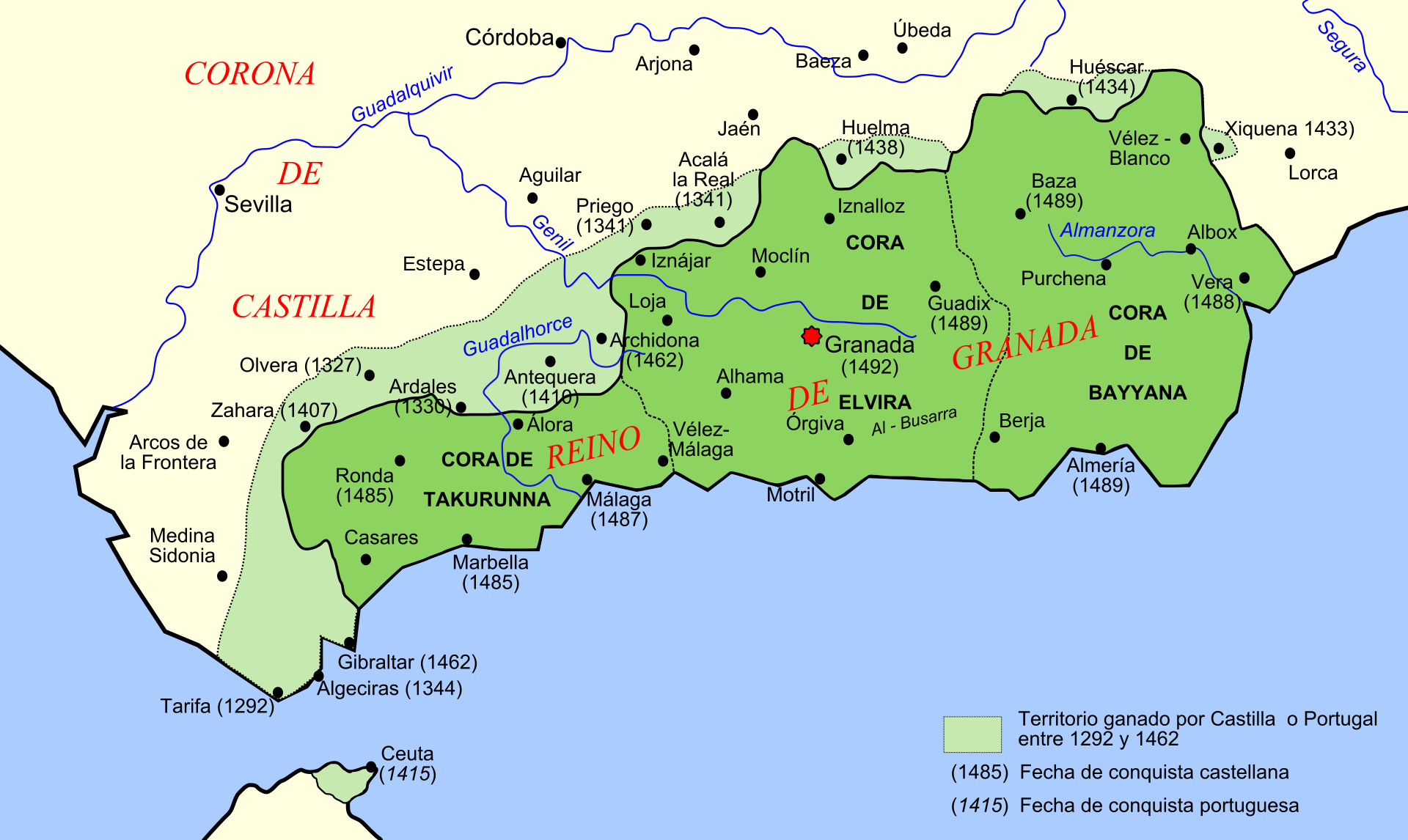 The truce of 1478 still formally operated when Granada launched an unexpected attack against Zahara in December 1481, responding to a Christian raid. The city fell, and the population was taken into slavery. This attack was the reason for the outbreak of war: the pro-war forces in Castile used it to launch an agitation in favor of decisive retaliatory actions. The seizure of Alhama by the Christian detachment and its subsequent approval by the royal couple of Castile is usually considered the formal start of the Granada war. Abul-Hasan tried to return Alham in March, but failed. The reinforcements that came from Castile and Aragon prevented Alhama from surrendering in April 1482. King Ferdinand personally took command of the army from Alhama on May 14, 1482.

Christians tried to besiege Lohu, but could not take the city. On the day the siege was lifted, the son of Abul-Hasan, Abu-Abdullah, or Boabdil, rebelled against his father and proclaimed himself Emir Muhammad XII. The war continued in 1483, when the brother of Abu’l-Hassan al-Zagall defeated a large Christian army in the hills to the east of Malaga. However, in Lucena, the Christians were able to defeat and capture Boabdil. Ferdinand II and Isabel I had not previously intended to conquer the entire territory of the Granada Emirate. The capture of Boabdil, however, Ferdinand decided to use as a way to conquer Granada. In a letter in August 1483, Ferdinand wrote: “To subdue Granada and destroy it. We decided to free him… He [Boabdil] wages war with his father.” With the release of Boabdil, now a secret Christian ally, the civil war in Granada continued. The Granada chronicler noted that the capture of Boabdil was “the cause of the destruction of the fatherland”.

In 1485, Boabdil was expelled from Albaicin, the center of his power in Granada, by the brother of Abul-Hassan al-Zagall. Al-Zagall proclaimed himself Emir and expelled his brother, who died shortly thereafter [6]. Boabdil was forced to flee under the protection of Ferdinand and Isabella. The ongoing disengagement among Muslims made it easier for Christians to capture the western territories of the emirate. In 1485, Ronda fell in just 15 days, which predetermined the fate of Marbella, the base of the Granada fleet of Granada, which soon also passed into the hands of Christians.

Boabdil soon reiterated his rights to Granada. Over the next three years, he de facto acted as one of the vassals of Ferdinand and Isabella. He promised to recognize Granada’s dependence on Castile in return for the title of duke.