Ghana, Mali, and Songhai were three of the greatest western African trading states.

These three Western African states dominated the trade of gold, salt, and merchandise between North Africa and sub-Saharan Africa.

These trades date back as early as 300 c.e and ended with the conquest of Songhai by Morocco in the 16th-century c.e.

Arab scholars and merchants as far away as Baghdad marveled at the wealth of these African states.

However, the trade of gold and salt was not the sole basis for West African civilization.

Remarkable cultural, intellectual, and societal achievements made Timbuktu and other cities famous centers for the production of books in theology, history, and science.

These books were often valued more highly than gold at the time.

Ghana, Mali, and Songhai were successful and well-organized states that overcame tribal divisions and fused traditional beliefs with the universal ambitions of Islam.

The internal strength of these West African empires was what made the gold trade so successful.

An intricate system of silent trade, transport, safe passage for merchants, and control over a vast array of tribes facilitated the countries success in trade.

When these empires declined, so too did the trade in gold.

The historical sources for the empires of Ghana, Mali, and Songhai are written Arabic sources.

These sources have a bias against non-Islamic beliefs. Many African griots or storytellers would pass down archaeology stories by word of mouth.

Archaeological digs continue to reveal surprising secrets about the richness and strength of Ghana, Mali, and Songhai.

Sometimes this would confirm stories that were once dismissed as fantasy.

Both written sources and oral traditions speak of the wealth and fame of the ancient kingdom of Wagadu.

Arabic sources call the kingdom Ghana, a name that means “king” in the Soninke language. The vast kingdom included the modern-day countries of Mauritania, Senegal, and Mali.

The climate of West Africa was dramatically different 1,000 years ago.

Archaeological evidence suggests that the parched climate of the Sahara drastically expanded south after 800–1050 c.e. when the empire of Ghana was at its height.

The capital of Ghana, Kumbi-Saleh, once the wealthiest city in West Africa, is now a remote archaeological site in the middle of the Sahara.

Climate change had a dramatic impact on West Africa as the center of power moved from near Ghana in the north, to Mali in the center, to then Songhai in the south. 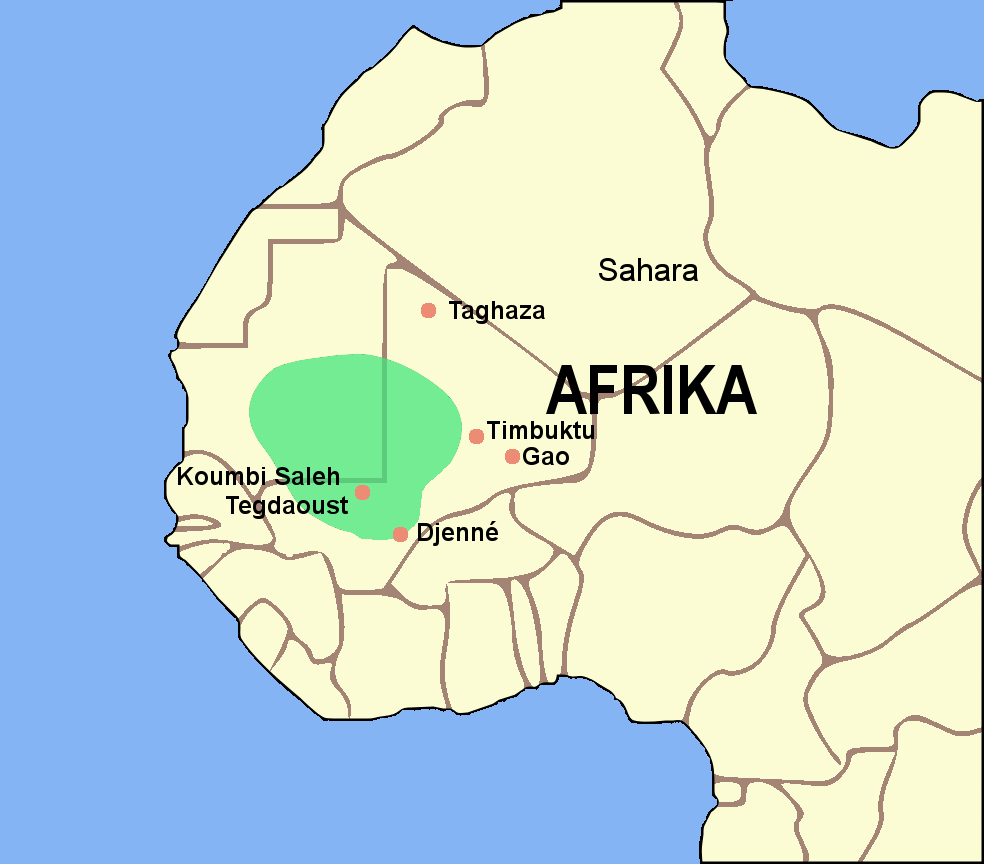 The kingdom was matrilineal, meaning that the king inherited the throne through the mother’s line. The King’s nephew then succeeded to become the next heir.

Matrilineal inheritance and the powerful position of women were constant features of traditional Saharan society.

According to Al-Bakri, the king of Ghana followed traditional African beliefs but respected Muslims who came to trade in his kingdom, often putting them under his personal protection.

The Almoravids, Berber, Muslim nomads from the desert attacked Kumbi-Saleh in 1076 c.e. and weakened much of the empire of Ghana.

Nevertheless, Ghana remained strong until it was annexed by Mali, an even wealthier and larger trading empire which formed south of Ghana.

The empire of Mali was founded by Sundiata, a king who not only overcame external enemies but his own physical disabilities.

Sunsiata constructed an empire second only to the vast Mongol horde of Asia.

According to legend, Sundiata’s brothers were massacred by Sumanguru, the king of Sosso. He was rivals with the people of Mandinke and Mali.

Sundjata, considered a harmless invalid who could not even walk, was spared.

Accounts tell how he was treated like an animal and taunted by other children.

He learned to walk on iron braces and became one of the strongest warriors and hunters.

18 years after the massacre, the young Sundjata organized an army and overthrew Sumanguru of Sosso at the village of Kirina.

The dramatic Battle of Kirina is still recounted by griots as a struggle between two great magicians.

After his victory, Sundjata united the Mandinke chieftains and gained control over all the southern ends of the trans-Saharan trading routes.

The successors of Sundjata, including a former palace slave named Sakura, expanded and consolidated the empire and later conquered the cities of Timbuktu and Gao.

Rise of Songhai under Askia

A pilgrimage to Mecca was one of the five pillars of Islam, and was necessary for all believers who could afford the journey.

Egyptian scholars give accounts of an enormous and extravagant royal caravan that visited Cairo on the way to Mecca.

The chronicler Al-Maqrizi said that he paid so much gold in his purchases of fabrics, slaves, and provisions that he caused the value of gold currency in Cairo to drop dramatically.

Mansa Musa not only returned to Mali from Mecca with greater devotion to Islam, but he brought several scholars and architects home with him, including the Andalusian architect al-Sahili, who helped transform the traditional architecture of Mali.

Although he did not force the conversion of his people, he encouraged the growth of Islamic schools and developed a more methodical form of government using written Arabic.

It could be argued that this tolerant fusion of West African and Muslim civilization made Mali one of the most advanced civilizations in the world.

The death of Mansa Musa (c. 1337 c.e.) led to a succession of kings unable to manage Mali’s enormous size.

Berbers in the north threatened Timbuktu, while the Songhai people in the south began their rise as the last and most powerful of the West African empires; the Kingdom of Songhai.

The backbone of Songhai’ power was the mighty Niger River.

As the empires of Ghana and Mali rose and fell, the Songhai fishermen slowly expanded from a region south of the great bend of the river Niger.

The Songhai founded the bustling trading city of Gao just south of this bend in the 1300s c.e.

Most of the Songhai became clients of the Mali empire until 1435 c.e.

They established a new dynasty called the Sunni.

Muslim chroniclers remember the Muslim Askia Muhammad Touré as the most famous king of the Songhai.

Using the message of Islam to rally his followers, he expanded the borders of Songhai into the east of Africa, connecting his empire with the Indian Ocean trade which went as far as China.

Mahmud al-Kati, who wrote many historic scriptures about Songhai, claimed Askia lived for some 125 years.

Although that may be an exaggeration, Askia and the river people of the Niger created a strong and magnificent empire that was not seriously threatened until the invention of firearms.

Firearms gave the Moroccan army a significant advantage when the Moroccan sultan Ahmed al-Mansur invaded the Songhai during the 1580s c.e.

Half of the Moroccan army died of thirst and starvation as they crossed the Sahara.

Still, the Songhai warriors were no match against the firepower of the Moroccans.

Soon, Songhai, the last of the great trading empires, was in ruins.