Huskarls were the bodyguards of leaders in Medieval Scandinavia and England. This elite unit was the last defense for the powerful individual that had them. These units were easily capable of dealing with any threat thrown at them. Adorned in mail armor and gambeson, accompanied with the famous Dane axe as well as a Viking sword and round shield, the housecarls’ efficacy in military prowess was unmatched.

Miklagard, or Constantinople was the home of the Viking Varangian Guard that served the Emperors of the Byzantine Empire. As political assassinations were common, the newly arrived seafaring Vikings were payed graciously to protect the emperor even to a violent grave. Armed with the best weapons and armor the Byzantine Empire could offer, they had protected the various emperors throughout the years, and quelled revolts to a bloody end, stifled political opponents and held the line in various battles and campaigns that demanded their deployment on the battlefield.

Meaning fellowship in most Slavic languages, they were essentially the friends employed by a powerful Slavic chieftain. They were lightly armed and armored. As the chieftain became a knyaz, king or tsar, the druzhina became the nobility called boyars that were veterans of countless battles, campaigns and wars. They were equipped with the best arms and armor that governed over the expanding lands of Kievan Rus’ and Novgorod.

The young nobility was eager to prove worthy in war. They were called the Boyar sons. They were adorned with lamellar or laminar as well as a gambeson, alongside a hand axe and a round shield. The Boyar’s sons proved themselves honorable to govern over the legacy of their fathers in battle. Thus, they were given plate armor with the noticeable face masks on their helmet.

Perhaps the most powerful unit in the English army were the longbowmen. Forcibly conscripted renowned hunters and competitors, the longbowmen were given the titular weapon that gave them the name alongside a gambeson for protection and a dagger for close combat. With their keen eye, muscular bodies and well trained use of the bow, they wreaked havoc upon the enemies of England.

The pride and joy of the Republic of Genoa, these men were adorned with mail armor and gambeson. Moreover, they were given a crossbow paired with a short sword and the Pavise shield. The Genoese crossbowmen were led by Genoese nobility in battle, and were the best defense as well as offense unit deployed in the various wars they participated in.

This elite mercenary infantry in service of the Holy Roman Empire is what was responsible for securing the empires’ many victories. This elite infantry was colorful and lightly armored, which was needed for them to be able to swing the two handed Messer and Zweihander swords easily. Veterans of many campaigns, these soldiers were the most expensive unit in the Holy Roman Empire’s army roster, since their lives were short lived as part of their crucial role in the battlefields.

Hussars were the vanguard that prevented Muslim Ottoman incursion deeper into Europe, and what saved Christendom as a whole. Usually they had a light shock cavalry and were given a lance and a lamellar armor. Also, they were noted for their pelts of exotic animals and wings made out of eagle or hawk feathers that were riveted on their backs. This elite unit easily controlled the flow of a battle in their favor.

Conquerors were at first driven by greed that would later colonize the New World by their sword and firearms. Clad in plate armor combined with their training in the arts of war and paired with an arming sword and musket, they were the ones responsible of ending entire civilizations.

Balkan Christians fell in the grasp of the Ottomans, who by the blood tax forcibly recruited young and capable men into military servitude, thus making them what we nowadays know as the Janissaries. Given the best weapons and light armor as well as quickly adopting the use of firearms, this elite slave unit allowed the Ottoman Empire not only to secure the power in its lands but also to expand them. 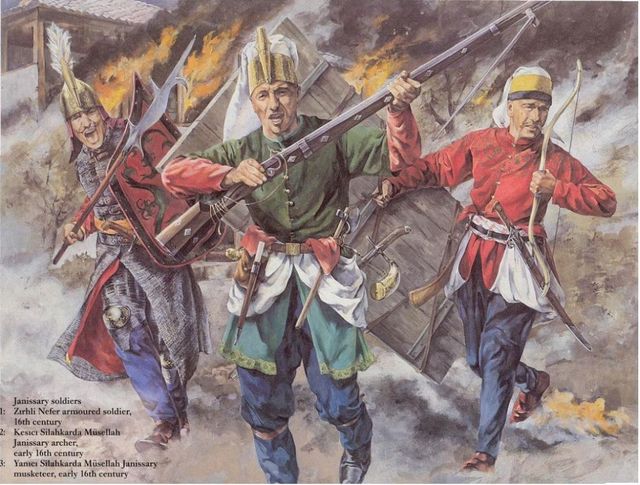