As their name suggests, these types of infantry used spears most commonly combined with a shield, and were the most numerous medieval soilders on the battlefield.

Clad in no armor or wearing the most minimal defense possible, these soldiers were the frontline and the meat fodder of the armies.

They lacked any training apart from being told to thrust the pointy end of the spear into their enemies, raise their shield in defense and to march forth in a line alongside others of their kind.

Militia came in all sorts such as; infantry, missile units or as cavalry.

They were generally armed with a spear and a shield combination alongside a short sword.

If they were infantry, they used a bow and a quiver of arrows paired with a dagger.

If they were archers, they would use a spear shield or a sword combination if they were cavalry.

Adorned with lamellar or laminar armor, combined with padding made out of the most common materials to prevent further injury, the militia were called the light troops.

Somewhat better trained than most of the meat shield, they were capable of defending against marauding warbands and holding the line in the battlefields they were deployed.

The most common types of medival soilders were the swordsmen.

As their name indicates, these soilders were armed with a swords.

In particular the arming sword and was paired with a round or rectangular shield.

Their armor was the chainmail type made purely out of iron.

Underneath this the swordsmen wore a gambeson which acted as a buffer zone between the armor and the flesh.

Levied from every corner of a country, they were trained to handle combat and the discipline needed not to rout as well as to follow commands.

Extensively deployed on the battlefields, the swordsmen were sent forth once the meat shield disappeared, and were fresh and eager to clash in combat with their enemies.

As the days of javelins and throwing axes were numbered in use on the ever-advancing battlefields, archers became the staple missile units of the armies.

Requiring a keen eye and a somewhat muscular body, the archers were usually hunters, or were given a training in the courtyard of the local barracks.

Also, they were given a bow, or a short sword for protection, most commonly known as a dagger.

Boiled leather, gambeson, and lamellar armor were the types of armor given to missile units of the army as they offered decent protection and were light enough to not restrict movement needed for shooting.

Appearing during the High Middle Ages, even though their history of usage is ancient, the crossbowmen were an alternative to archers.

The crossbowmen were more the favorably deployed medival soilders when defending, as well as pelting down opponents once they got to a somewhat closer range.

The crossbow requires little effort to allow it to shoot.

Hence, the soilders operating them were given mail armor and gambeson underneath.

This was combined with a Parma or a medium sized shield to protect them.

Men at arms were the mercenaries appearing in the Late Medieval Ages and somewhat replaced the common swordsman in the army roster.

The rivaling knights (although they lacked the title to do so) were highly trained individuals in military doctrines, tactics and use of arms.

Also, more often than not they were veterans of battles in wars.

They started off with an arming sword, a mace or a hand axe.

However, these were quickly replaced with plate armor, gambeson and heavy lances, so soon after, they became mounted instead.

Driven by a chivalric code to protect the weak and poor of Christendom, the knights were a caste of people that were given a fiefdom to govern over or were usually guards of a leader.

Trained since they were young in military doctrine as well as the use of weapons, the knights were either used as infantry or were mounted instead.

As infantry they held the arming sword, a mace, or a hand axe and wore plate armor combined with a gambeson underneath which allowed them the best type of defense on the battlefield.

They were very expensive to be paid in the armies because of how much they contributed.

They were named after the billhook weapon they used.

Billmen were a type of heavy infantry that had become more apparent in use during the Late Medieval Period.

The billhook weapon allowed them to thrust, hack and chop their way on the battlefield with relative ease.

They were deployed to dismount the cavalry that tried to break their armies’ rank.

Half or sometimes three fourths of their bodies were covered in plate armor combined with a gambeson.

The billmen were trained specifically to dismount enemy cavalry and to disarm the shield line of their foes. 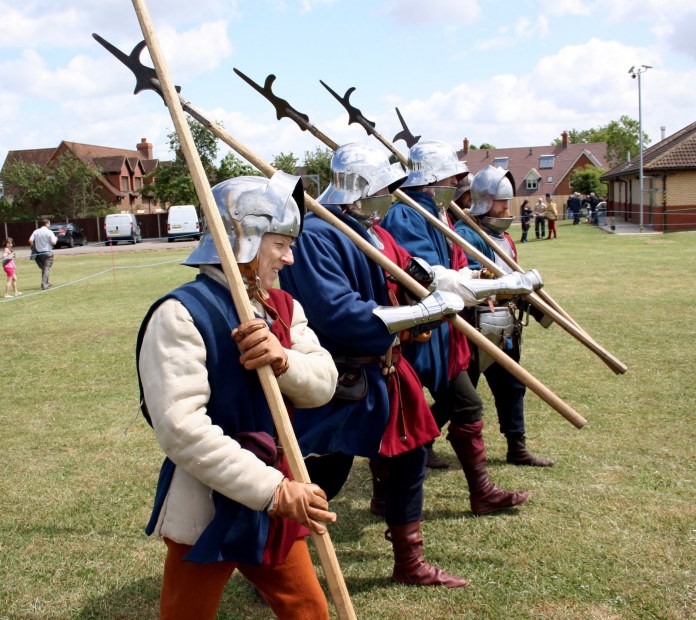 With the introduction of gunpowder to European soil, the rise of soldiers wielding firearms arose.

Wielding the arquebus rifle, and clad only in light types of armor paired with a short sword for close quarter combat, the Arquebusiers brought forth a new era of warfare with their explosive blasts propelled projectile death.

This type of armor had become nearly impossible to pierce due to the use of two handed weaponry swung by specifically trained infantries.

This became very common in the Medieval Ages.

A two-handed sword, axe, a hammer or a spear were the weapons used by this infantry to destroy enemy spears, dismount cavalry, break ranks easily or crush knights specifically.

The numerous ways they were used on the battlefields was impressive to say the least.

They were clad in plate armor and gambeson usually, but if they were to dismount and target knights, they would most likely use a light armor instead.